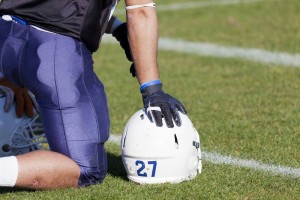 The ‘N-word’ in the English language is unlike any other. Its mere presence, regardless of context, results in a collective feeling of uneasiness. At the same time, given its often casual use in pop culture, combined with the general cycle of desensitization embedded within media, the ‘N-word’ has, in some case, actually developed into what some might call a term of endearment. Somewhere in the middle, perhaps, is where we sit.

When the NFL proposed in March the potential to pass a new rule restricting use of the ‘N-word’ on the field — an idea that was ultimately shot down as it already falls under the league’s unsportsmanlike conduct rule — it brought extra attention to a word of such sensitive connotation. The NFL may not have been successful in implementing the aforementioned speech restriction, but giving the topic a national platform is a step in the right direction.

The N-word, originally derived from the Latin ‘niger’ (black), became considered as pejorative in the early nineteenth century, according to the Anti-Defamation League’s Anti-Bias Study Guide, (1998). During the period of enslavement in U.S. history, the ‘N-word’ or “black” were both interchangeably inserted in front of a common first name. At the time, it was meant to separate the slave from any white person with the same name. Historically, the nature of the word is one of separation.

The NFL rules committee had considered empowering referees to impose a 15-yard penalty on a team whose player is heard making racist remarks. Any proposal passed by the committee requires a two-thirds approval by the league’s owners. The NFL’s vision to ban the ‘N-word’ was clearly a reaction to both the Riley Cooper and Roy Ellison incidents. Given the competitive and aggressive nature of not only American football, but sports in general, the focus to ban any one word strays away from the root problem: lack of understanding of what the word means.

“I mean, I don’t think he’s [Riley Cooper] racist, but he said something — it was boneheaded at the time,” said Kenny Clark, a former NFL wide receiver with the Minnesota Vikings. “I don’t know if he meant it, but they got him on video and it looked bad. That kind of opened the NFL’s eyes to this issue to put a stop to it.”

Assuming the banning of the ‘N-word’ is, in fact, approved by the league, the most pressing problem would become how to legitimately police it. What if the referee thinks one player said it when it was actually another? Could the official take into account the context of the conversation before deciding whether to call a penalty? The idea of an insensitive-remark-free league seems, on some level, to be more of a politically correct mirage than something truly groundbreaking.

“They can’t ban the word,” said Clark. “They can try to slow it down in terms of what the referees will hear. You can’t go off word of mouth. The ref would have to hear it.” 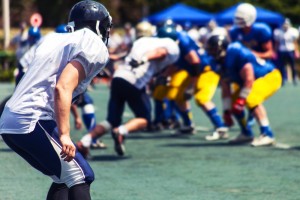 As Clark explains, the use of the ‘N-word’ by players in the NFL typically has no real strings attached to the overarching theme of racism. On the field, he says, it definitely is used as a term of endearment, regardless of public perception. Clark notes the ‘N-word’ is situational in its use by NFL athletes, but that most retired athletes actually refrain from using it in any shape or form.

“It’s just like cursing. People usually curse because they can’t think of another word. When I was 25, I didn’t care what came out of my mouth. If it hurt you, it hurt you. If it didn’t, it didn’t. I didn’t care.

“It’s an immature, ignorant word to use anyways,” adds Clark. “I don’t use it anymore.”

‘N-word’ and Racism In Other Sports

The NFL is hardly the exception to the rule; all professional athletes deal with trash talking, excessive cursing, and yes, their fair share of racism. In April 2014, a banana was thrown at Barcelona’s Dani Alves in a professional match in Spain. Being accustomed to the antics from fans throughout Europe, Alves picked up the banana, peeled it, ate it and took the corner kick. If anything, the recent controversy surrounding Donald Sterling, the soon-to-be former owner of the Los Angeles Clippers, acts as a not-so-gentle reminder that racism continues to be at play within professional sports.

“I have had 10,000 people make noises at me like I was a monkey during my first game in as a rookie,” said Franklin Robinson, MVP of Drew League 2013 and professional basketball player for Nilan Bisons in Finland. “There is racism everywhere. But I believe that most of the stuff we see and hear during games in Europe is not out of personal hate, but out of love for their teams and quite frankly, ignorance to what is now accepted in everyday life. The same fans that chant out racist stuff to foreigners on a different team will tell you how much they love you as a player for their current team.”

Whereas the helmets in American football can mask a player from completely verbally harassing an opposing player, sports like basketball and soccer offer no such barriers amongst competitors.

“Talking trash is certainly prevalent in soccer games,” said Jeb Brovsky of Major League Soccer’s Montreal Impact. “Usually most of the athletes on the pitch are bilingual or trilingual so the trash talking is very diverse. Everyone understands what the other is saying though so the message is always received. I have heard the ‘N-word’ used on the field a few times but not often.”

Trash-talking, in general, is common at all levels of sports. The same type of talk heard at the NBA level can be experienced at public parks around the country. Competition often breeds animosity, which in turn can result in perceived-racist comments. Athletes, more or less, tend to empathize with the passions within and surrounding a game. What is said within a game is accepted, by many, as simply a part of the sport. 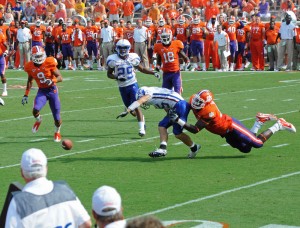 Regardless of how familiar trash-talking becomes to the professional athlete, the sheer offensiveness associated with the ‘N-word’ rightly continues to be a point of concern. Echoing similar sentiments of Clark’s maturation, older, former athletes tend to better understand the lack of professionalism surrounding the ‘N-word.’

“I can’t remember hearing the ‘N-word’ at the highest levels I played at,” said Kingsley Costain, former Under-21 Team Canada basketball star and inventor/founder of Shooters Revolution. “I would hear it the most in atmospheres where the majority of the people and players are of black or Caribbean descent and inner-city projects. I guess it’s because of a lack of education and ignorance to the use of that word and what it really means.”

The concerns brought up by the NFL with regard to the ‘N-word,’ and more specifically the league’s aim to place some level of ban on the word, are surely worthwhile and a step in the right direction — but still, the best defense against future incidents is to nurture the proper habits at a young age. Racism and parenting are interrelated and it is the responsibility of adults to lead by example. In this case, not correcting an action is just as harmful as supporting a poor one.

Education and proper guidance — whether it be from a parent, coach or even next-door neighbor — has the potential to create solid values and better attitudes. It equips the next generation with the tools to address the discrimination rooted within our society.

“The youth don’t have that guidance,” said an anonymous source (we’ll call him T) that grew up on the South Side of Chicago, and played football at Simeon Career Academy, Bradley University and the University of Illinois. “The parents are afraid of their children now, and I really think that. Children tell the parents what to do nowadays, not the other way around. People will say that’s not related, but it is. Parents have to teach the kids that the word is derogatory and using it is unacceptable. If you allow it and sit around and don’t correct them, then don’t get upset when you hear it.”

Growing up on 53rd and Bishop, T’s immediate mentors became the local leaders of the Nation of Islam after he lost his mother to a tragic accident.

“It starts with parenting. It starts at home. I didn’t have a mother. My mother got shot and killed when I was five years old, but at the same time, I had adults around me that said [using the ‘N-word’] was unacceptable.”

Simeon Career Academy, notably known for being NBA superstar Derrick Rose’s alma mater, did not tolerate usage of the ‘N-word’ during T’s high school years in the mid-to-late 1980s, according to T. Due to his upbringing with his community and later in school, the urge or desire to use the word was never an issue. 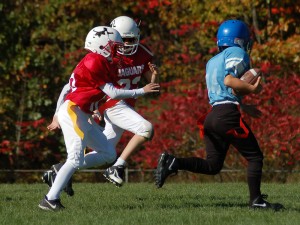 Rather, through simple education and guidance, a portion of one of the country’s most crime-riddled areas was raised with the necessary tools to improve circumstances for the next generation.

The emphasis on education and community leadership has also been identified at a larger level. In 2001, The World Conference against Racism, an international event held by the participating members of the United Nations, greatly stressed the “need to train teachers in anti-racism and human rights, appreciation of world cultures, and inter-cultural communications and sensitivity.” Such formal training would help ensure nondiscrimination, which would ultimately have a domino effect outside of the classroom.

“This new generation has redefined it,” said T, referencing today’s music and the media and the casualness with which the ‘N-word’ is often used. “To the older people, like me, we remember where the word originated. No, I don’t have respect for the word or people that use it.”

The NFL may have a tough road ahead in its efforts to better police insensitivity and potential racism, but the impact of a large platform for such a pressing issue cannot be understated.