Work All Day, Ride All Night

Cycling during the day is ideal, but for many riders, coming out at night to meet their fitness goals provides them with much more than just exercise. It’s a social experience that brings together people from all walks of life. Don Ward, aka Roadblock, of the Midnight Ridazz describes it as “Fun. F-U-N. ‘F’ period. ‘U’ period. ‘N’ period.” 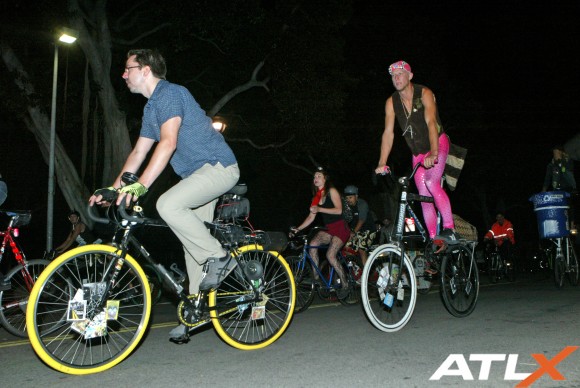 On any given night around the U.S., there are groups of cyclists roaming the streets in a herd-like fashion, riding for as many as 20 miles through various parts of cities and towns. These rides have become so popular that, in certain cities, the police will block off streets or escort the riders.

This craze started about 10 years ago when Kim Jenson emailed a few of her friends to go out riding that night. A group of eight, which included Ward, took an 18-mile ride around downtown Los Angeles, and Jenson called them the Midnight Ridazz.

The group quickly grew, and at one point had about 2,000 members. They met on the second Friday night of every month, with groups large enough to engulf major streets. There would be so many cyclists that cars would stop to let the group clear. At that point, the club had grown too large for the original members to handle, so they instructed other riders to branch off and create their own rides. It quickly spread around the country, to the point that in a number of major cities, there are multiple rides going on at once.

Getting exercise is a major benefit of these rides, but that is not why most people show up for these riding events.

“It’s an interesting social experience,” Ward said. “It’s an adventure, and we’re not stuck in the same place like at a bar. We’re not spending any money, so there is no pressure for that. Anybody can come out and it’s open-invite. You see people from all walks of life here.”

To keep things interesting, the Midnight Ridazz, as well as other cycling groups, have theme nights where riders can dress up in costumes if they choose to. Many people will express themselves artfully through their attire and with additions to their bicycles. Expression is a major part of the environment, and this is something that anybody with any fitness level can participate in. 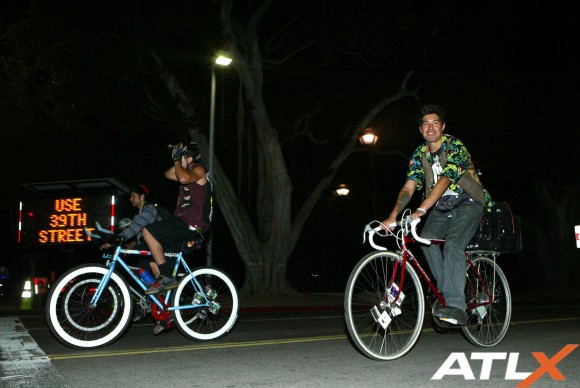 “There’s no pressure here to be fast or anything in particular,” Ward said. “People get drawn in and they get used to riding. We’ll do 20 miles, and people won’t even notice because they’re having so much fun.”

Fun is the key word, as they have created a party-type atmosphere.

“When you ride while you’re partying, it gives you a weird endorphin,” said the Midnight Ridazz resident sports scientist.

“Rather than being stuck in a club, you’re out in the open and you just feel really good.”

Being out and about on a Friday night among people who have a similar interest has attracted many people to nighttime riding, and it is not as competitive as other forms of riding, which brings out people who simply enjoy cycling.

For Anthony, as much as it is a form of exercise, it is an outlet from the daily grind.

“I’ve had a long week at work, and all I want to do is ride. It’s a great way to socialize, meet new people, get some exercise and be a part of a community,” Anthony said.

For anybody with a bicycle who is looking to interact with some really cool people while getting in some exercise and artfully expressing themselves, night-riding may be the perfect workout program. At the least, it would be a good addition to anybody’s fitness regimen.

biking night riding 2015-06-07
atlx
Share !
Previous: It Takes a Big Man to be a Jockey
Next: Brighten Up Your Next 5K: The Trend of Colorful Runs