Shooting a basketball properly is an inexact science. Though there are generally agreed-upon principles regarding proper form, there’s also a sizable grey area. With the introduction of the EVO ONE, Shooters Revolution has effectively eliminated much of the confusion by providing instant audio feedback after the ball is released.

How the Idea Evolved

As an undersized, 5-foot-7 Division I guard, Kingsley Costain leaned heavily on the 3-point shot during his playing days at both Pepperdine and Concordia University, shooting just shy of 42 percent for his final collegiate season. After his playing career ended, he continued to study, and teach, the art of shooting, working with young players to perfect a seemingly imperfect art. He wondered: what makes for a good shooter, or for that matter, a bad shooter? After watching countless kids shoot countless shots, Costain believes that it all comes down to consistent mechanics.

To Costain, where a player shoots from, whether in front of his face or behind his head or even off to the side, is largely irrelevant. What matters is the release, and more importantly, that it’s the same every time. Same flick of the wrist. Same follow-through. Same rotation. But how can a player know if his or her mechanics are truly consistent? A coach harping is one thing, but what, Costain wondered, could offer that kind of definitive feedback? Finally, the big idea happened during an encounter with a young (and stubborn) player who wasn’t buying Costain’s theories.

“And I said, ‘You know what, man? I swear if the ball made a noise, or something so you’d know, it would eliminate this argument,’” Costain said. “And right there, the idea dawned upon me, and I was like, ‘That would work. I would use that myself.’”

Costain was already convinced, but as he told more and more people about his idea of a ball tat provided audio feedback to the shooter, his confidence in the idea continued to grow.

“I kept following up on leads and reaching out to engineers and the right people,” he said. “They told me what to do, and three or four years later, here we are.”

Of course, when Costain was doing everything by himself, money and time became serious issues. For that reason, after a year he brought Ryan Holmes and Michael Johnson on board  –both of whom he met in college. Both guys shared Costain’s passion for basketball and were people he could trust.

The EVO ONE basketball is infused with micro-sensor technology that allows the ball to identify its rotation in the air, and thus, determine if a shooter’s mechanics are proper. Audibly enabled components are also attached so that when the ball is shot correctly, you’ll hear a beeping sound. 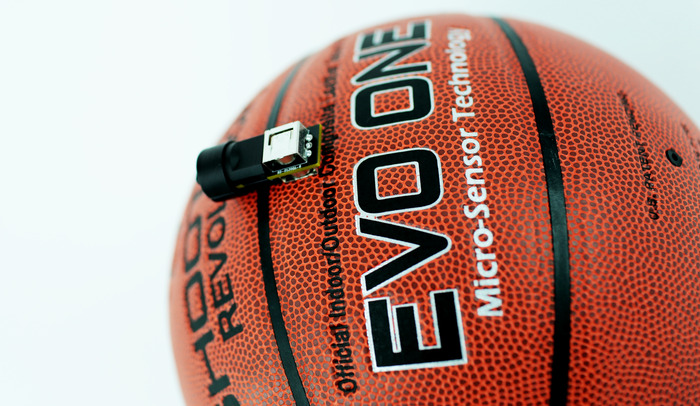 “The ball has a built-in coach,” said Costain. “You hear that noise that’s essentially the coach, the friend, the player, the parent saying, ‘Hey, good rotation. Good flick. Good follow-through,’ because you have to have those things to get the [proper] backspin. People on their own don’t have that luxury whether you have money or not.”

Also, the ball’s micro-sensor is easy to remove if you’d like to play a regular game without hearing feedback on your mechanics. And whether the micro-sensor is inside the basketball or not, the ball’s weight remains within the regulation range of seven to nine pounds per square inch.

Although Costain and the guys had already secured enough money to go into production, they made the decision to crowdfund through Kickstarter, not just to gain more funding but also to create that all-important buzz around the product. After launching their campaign on Aug. 14, 2013 with a goal of $45,000, they successfully exceeded that amount within 34 days. Without any foreign endorsers, Costain says Kickstarter and other social media platforms have been key in generating excitement about the product overseas.

Kingsley and his crew emphasize that there is no replacement for hard work in life and on the basketball court. In fact, they hope their new basketball technology inspires players to work more diligently on perfecting their shot. For the guys at Shooters Revolution, “the 25th hour” represents “the extra time you sacrifice and put in each day in order to improve your craft.”

So what are you waiting for? Start getting those shots up. Basketball season’s right around the corner.