This past January, the LA Times was one of many publications that reported an Oakland Raiders Cheerleader was filing a class-action lawsuit against her employers for allegedly underpaying wages, withholding wages, and being forced to pay for expenses forced on the Raiderettes by the team.

And that was just the beginning. In February, Alexa Brenneman, a cheerleader for the Cincinnati Bengals, also alleged that her employer violated labor laws. She claims that last year she was only compensated $855 for working over 300 hours. Do the math, and that adds up to a grand total of $2.85 per hour. 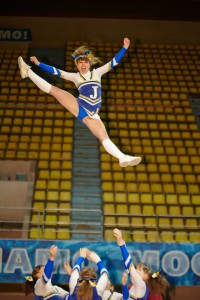 So what gives? Perhaps the problem lies with people’s perceptions of cheerleaders in general. While any person working any job is entitled to fair wages, does the undervaluing of NFL cheerleaders represent a bigger issue? Are cheerleaders appreciated for their efforts on any level?

This concept was highlighted during a lawsuit against Quinnipiac University, which attempted to remove volleyball from its roster and add cheerleading in its place. Because of Title IX, it wouldn’t have been possible to keep both sports, and in 2013 the volleyball players sued the University. During that case, Judge Stefan R Underhill stated, according to FOX Sports, that “…competitive cheerleading had not developed enough to be considered a college sport for Title IX purposes…”

Now think about this: While cheerleaders are awarded scholarships similar to the marching band or dance team, they are not considered an official NCAA athlete and do not have the opportunity to compete in the official NCAA championships. Although the NCAA once considered adding cheerleading to its list, it is no longer under consideration. According to the judge, not being a NCAA sanctioned sport prevented the cheerleading squad from competing in competitive opportunities that men were afforded, one aspect of Title IX that isn’t commonly addressed.

But while the NCAA and NFL may not consider cheerleaders athletes, the American Academy of Pediatrics certainly does. Because of the large amount of injuries associated with cheerleading, the association released a policy statement addressing the epidemiology and recommendations for prevention. 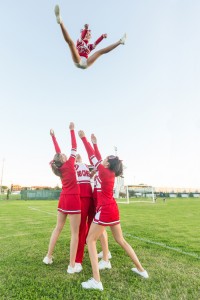 The article states: “When cheerleading originated in the late 1800s, the primary purpose was to lead the crowd in cheering on sports teams … However, over the last century, cheerleading has evolved dramatically into a competitive, physically demanding, year-round activity consisting of fast-paced floor routines with leaps and jumps, gymnastics-style tumbling, and complex stunts, such as pyramid building and tossing athletes in the air.”

Perhaps the problem isn’t that current cheerleaders don’t meet the requirements to be considered athletes, but rather, society hasn’t caught up with the ever-evolving sport of cheerleading.

Although many people may scoff at cheerleaders being athletes, problems arise when the sport isn’t taken seriously.

Dr. Paul Stricker, who specializes in both pediatrics and sports medicine would likely agree that cheerleading, in its current form, has evolved into a sport requiring physical toughness and talent, and has treated plenty of injuries from cheerleading as well.

“We definitely consider it a very high-risk sport with a high incidence of injuries; some are overuse, but many are acute traumatic injuries as well,” said Dr. Stricker. “All the tumbling, stunting, throws, et cetera, have provided a high athleticism sport that is appealing to watch, but has also provided many opportunities for serious injuries.”

Although Dr. Stricker is a pediatrician, he’s certainly in tune with trends in the sport on all levels. 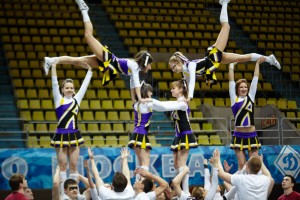 “At the college and national competitive levels, the stunts and risks are both greater,” said Dr. Stricker.

While it’s possible to argue both sides of whether cheerleading should be considered a sport, there are dangers in opposing its designation. For places where it’s deemed an activity rather than a sport, there is a lack of qualified coaching available, which may contribute to injuries.

And even if you discount the physical risk, the stereotype that cheerleading isn’t worthy of sport status is demeaning to the hard work, dedication and sheer athleticism of cheerleaders who have dedicated their time and effort to a visually stimulating, highly athletic endeavor.