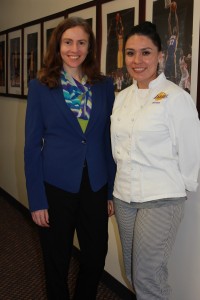 In his nearly 30 years as the Los Angeles Lakers’ head athletic trainer, it’s difficult to imagine how many “brilliant” ideas Gary Vitti has been pitched — ones that would supposedly improve his players’ nutrition and thus, their performance on the court. But prior to the 2012-13 season, he became intrigued with an approach submitted by a couple from Napa, Calif., after they mailed him their book, Deep Nutrition.

“We have a chapter in our book that specifically addresses things you can do dietarily to come back a little quicker from soft tissue injury,” says Luke Shanahan, the co-author who also happens to be a lifelong Lakers fan. While Luke is the more experienced writer of the household, his wife, Cate, is the scientist, having studied biochemistry and genetics at Cornell University. She’s also a board-certified physician.

Together, the two have vigorously studied nutritional science and metabolic rehab for the past decade, even spearheading a weight loss program in New Hampshire based on many of the same principles found in their book.

After Vitti read the book and was impressed, he held a couple of conference calls, in which he and Lakers Strength and Conditioning Coach Tim DiFrancesco grilled Dr. Cate with a variety of questions about her approach to nutrition. A grandchild of New England dairy farmers, “Grass-Fed Tim” (nickname courtesy of Metta World Peace) naturally liked what he was hearing about grass-fed animals. Cate’s answers more than satisfied the guys, and after a few calls she was brought on board to introduce her PRO (Performance, Recovery and Orthogenesis) nutrition program to the team. (Rounding out the PRO team is Lakers chef Sandra Padilla, who is skilled in making the food taste great). 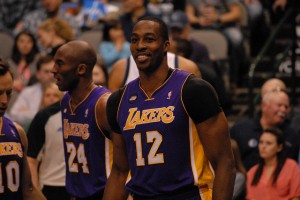 As documented in Part 1 of Ken Berger’s three-part nutrition series for CBS Sports, months into the 2012-13 season it was discovered that Dwight Howard was “consuming the equivalent of 24 Hershey bars a day in the form of candy and soda.” Just an alarming amount.

The intervention wouldn’t come until the All-Star Break when it became obvious that Howard was not recovering from his 2012 back surgery as quickly as many had hoped. Something needed to be done.

“This was not an experiment to see if it (the nutritional plan) could help Dwight,” says Shanahan. “We saw this as an emergency situation where a guy we cared about was trying to heal and it became clear to us that his sugar intake was getting in the way of that. And so we made the phone calls to his entourage and all that.”

It was at that point that Howard immediately bought in.

“I think that what really grabbed him,” says Shanahan, “is when we said about his back hurting, about this window of opportunity (that) may be closing. When he heard that, it was like, that to him was something he didn’t want to mess around with. And he immediately was like, ‘Whatever you got to do.’”

The diet advocated by the Shanahans can be thought of as a Paleolithic diet of sorts. It calls for approximately 50 percent fat, 25 percent protein and 25 percent carbs.

A common misunderstanding of the diet is that the aforementioned percentages refer to weight when they, in fact, refer to caloric breakdown.

“Some people are like, ‘Oh my God, this is crazy. How could somebody survive on so little carbs and so much fat, especially if you’re an athlete?’“

For its weight, fat is especially rich in calories, for example, so the Shanahans are definitely not recommending that people load up half their plate with fat.

“What we’ve done is pull back on some of the empty calorie stuff like pancakes, waffles, rice (and) breads and replaced it with other more nutrient-dense stuff,” says Shanahan.

He also stresses that the 50-25-25 caloric distribution is not a hard line, but rather a “baseline estimation of how we break down the macronutrients and we’ll diverge from that when it makes sense for individual players.” 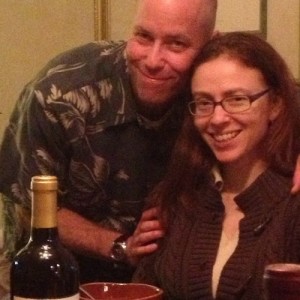 For everyday people, the Shanahans’ advice is the same as they tell the Lakers. First, you should look for opportunities to remove empty starches from your diet. Of course, a morning waffle won’t kill you, but then again, there are many alternatives that are much more nutritionally sound. That is because empty starches turn to sugar in the blood.

Another misconception is that they are advocating for a ketogenic diet.

“We’re not completely eliminating carbs or going into any kind of significant carb austerity,” says Shanahan. “We’re just trading in some carbs for more nutrient density to allow the metabolism to be able to make use of both fat and sugar for energy.”

And there still are carbohydrate-rich foods available at the team’s buffet spreads should a player choose to go that route. Players are educated and given more healthy options to choose from, but they are given the final say of what goes into their bodies. By no means are they forced into doing anything against their will.

There are little things you can do to improve your nutrition, according to Shanahan.

While the book lists a number of toxic oils to be avoided, including canola, soy, corn, cottonseed and sunflower, not to mention partially hydrogenated oils (but that’s a given), beginning with the elimination of canola oil will make a significant difference, argues Shanahan. Learning to cook as opposed to buying processed foods is one way to generally steer clear of canola oil.

“The bad oils is the main thing that makes junk food junk,” he notes.

Napa Valley cook Thomas Keller has been hailed as one of the best in the country, but the Shanahans won’t eat there, because according to his cookbooks, he uses canola oil. Fortunately, many tops chefs are switching to olive oil and peanut oil for high-heat cooking these days, says Shanahan.

Making your own salad dressing is another way to avoid canola oil. It’s also wise to look at the ingredients list on the labels of processed foods.

“The higher up canola is on the list, the more you can consider it junk food,” says Shanahan. “It’s as simple as that. If canola is (one of the) first three ingredients, you’ve got junk food in your hand.”

Another simple tip from the Shanahans: Buy wild as opposed to farmed meat. While no ordinary person can afford to purchase a 400-pound grass-fed cow like DiFrancesco did with current Lakers Chris Kaman and Robert Sacre, there is sound logic in paying more for higher quality meat.

“The benefits of the nutrition profiles across the board, including the Omega 6 to Omega 3 ratio, nutrient density, the health of the fat and the pesticides that are locked inside the tissue…all of that is substantially better when you spend the extra money to get a free-range chicken, wild fish and grass-fed cows,” explains Shanahan.

He hopes the costs of such meat will eventually come down as the grass-fed movement continues to grow in popularity, but for now it’s a necessary evil to pay more for better meat. As Shanahan bluntly puts it, “If you don’t pay through the nose, they’re going to sell you only meat that comes from an animal that was treated horribly and isn’t very good for you.”

“Even if you’re buying a little less than you’re used to, fine. We’d rather you do that and get the quality meat and switch out some of the meat you were loading up on with good, healthy organic vegetables.”

You can also make a chicken stock, with the help of instructional YouTube videos like this one, in about two hours, as long as you remember to freeze the free-range chicken carcasses. The chicken stock boasts material that is “very protective of the joints,” according to Shanahan.

Although there are many nuances to their plan, the Shanahans devised a chart to simplify the approach, while Vitti provided a nice assist by contributing the idea to use a traffic light system. As it sounds, foods noted in green should be enjoyed without a second thought.

Foods in the red section? No way! Never.

And so it goes.

In their second season under the plan, the Lakers seem to have found a nutritional system that works for them.

“With the Lakers taking the lead on that, I think that more professional athletes and the NBA in particular are going to be looking at nutrition as a place where improvement can bring a lot of benefit,” says Shanahan.

And other teams and players are taking nutrition more seriously (the Miami Heat now measure players’ body fat every week and guys like Ray Allen, Blake Griffin and Derrick Rose have made significant changes to their diets), as documented further in Ken Berger’s series of pieces.

“We’re really doing a comprehensive campaign with the Lakers, in that we’re not just giving them a couple of bits and pieces of information to be easily misinterpreted,” says Shanahan. “We’re giving them as much as possible, a wholesale understanding of what works for them and what won’t, and then tweaking it for the individual players where that makes sense.”

In this respect, some NBA players and teams are beginning to understand that bringing in experts to consult on their nutrition can potentially lead to improved performance.

Likewise, for the millions not playing in the NBA but who care about their nutrition and daily performance on and off the field, nutrition is an area upon which many of us are becoming increasingly more serious. After all, you are what you eat, and most of us would prefer not to be junk.