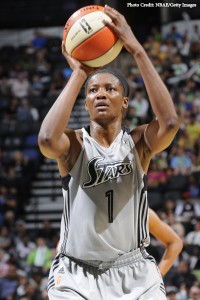 For elite athletes, Father Time doesn’t care about a player’s dreams, goals or even talent. Even though no one is exempt from this reality, 15-year WNBA veteran DeLisha Milton-Jones isn’t surrendering so easily.

It’s a young woman’s game. The average WNBA player is a mere 26.5 years old, while Milton-Jones is one of eight players still in the league who was born in the 1970s. She will turn 39 this September, making her the second-oldest player in the league. Despite the fact that she shares a locker room with players more than 17 years her junior, the San Antonio Silver Stars forward has managed to survive and thrive thanks to a three-pronged approach that involves constantly working to improve her game, eating right and diversifying her non-basketball workouts.

Milton-Jones has had the opportunity to play for former NBA talents Michael Cooper and Orlando Woolridge, as well as alongside Lisa Leslie, one of the best to ever play the game. “They give you valuable information,” she says. “The one thing that I learned from all of them is that when you’re a pro, you have to approach the game with a certain mentality, meaning every year you come back, you have to come with something new added to your game.”

Before every new season, the league welcomes fresh-faced rookies who may have a biological advantage in terms of age, but Milton-Jones’ constant effort to improve upon various facets of her game has counteracted that tide: “It has a lot to do with me recognizing early in my career that if I wanted to have longevity, I would have to become more versatile.”

Like many young players, Milton-Jones didn’t concern herself with proper nutrition early in her career.

“When I first came into the league,” she says, “I was eating everything in sight. Your metabolism’s at an all-time high, so you can get away with certain things.”

In 2004, an ACL injury afforded Milton-Jones the opportunity to re-evaluate her basketball mortality. She did research, spoke with her trainers and strength coach and discovered that she had to make changes to her diet. “Certain things that you eat take away from your overall health and performance on the basketball court,” says Milton-Jones, “and the deeper you delve into that, you realize that, ‘Wow. If I change this, I can feel this way, and then I can go a little bit longer or harder on the court.’”

While playing overseas and enjoying Europe’s decadent cuisine more than four years ago, Milton-Jones discovered that gluten was affecting her health. She was placed on a gluten-free diet as a temporary solution, but decided to remain gluten-free ever since.

“It’s really changed my life,” says Milton-Jones, “because it makes you live a healthier lifestyle and approach nutrition from a different mindset. It takes out a lot of processed foods and you eat cleaner, more things that are made in this natural form.” 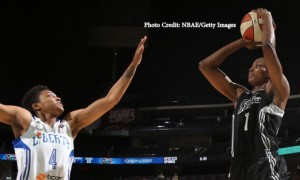 Milton-Jones adds, “Growing up in rural Georgia, we grew up eating everything from the rooter to the tooter on a pig. Going back home, now, after becoming a professional athlete and being in California where it’s so health-conscious, I’ve compared the two and I was like, ‘Wow. The food that we eat, it really kills us.’”

Milton-Jones considers herself a “natural-born runner,” and therefore doesn’t feel the need to run outside of practices and games. Instead, she utilizes a varied approach that includes TRX suspension training, P90X, yoga and bikram yoga, among other things. Evidently, the method has been effective, yielding 12 of 14 seasons in which Milton-Jones has played at least 30 games (a full WNBA season consists of 34 games per team).

“I like to stay active and it’s not just for basketball,” says Milton-Jones. “This is my lifestyle. Once I finish basketball, these are things that I’ll continue to do until the day that I die.”