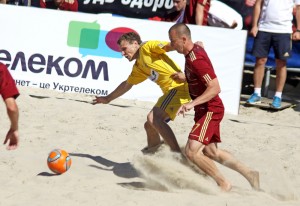 This phrase, or rather, this way of life, not only captures the Brazilians’ passion for the beautiful game, but also offers some insight into how the world’s fastest growing sport of beach soccer originated on the beaches of Copacabana in Rio de Janeiro. Given the lively atmosphere surrounding the sport, whether it’s being played professionally or as a hobby, beach soccer is one of the most enjoyable and physically demanding activities many have yet to experience.

“Our fans worldwide grow day after day, and there are more and more competitions, and more and more regulated teams every year,” Ponset said. “It is truly noticeable the way beach soccer is gaining weight within the FIFA structure. And not only at top-flight level, also in development and grassroots programs.” 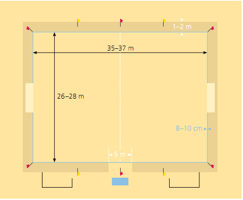 “The surface in professional beach soccer is a level ‘field’ composed of only sand – no pebbles, rocks, or shells that could potentially injure a player. For international competitions, the sand must be at least 40 cm deep.”

The sport’s rapid growth is hardly a mystery. The atmosphere – most notably the weather and music – along with the high-paced nature of the game makes beach soccer universally attractive. One of the biggest complaints the U.S. market has had towards regular soccer is its lack of scoring. In professional beach soccer, in which three 12-minute periods are played (five vs. five), there is an average of nearly nine goals per game (8.8), and an average of one shot on goal every 30 seconds.

While beach soccer is clearly a byproduct of traditional soccer, the game at its core is original, down to the fundamentals and in-game tactics. Given the laid-back atmosphere surrounding beach soccer, the average sports enthusiast will assume it is inferior, at least in terms of legitimacy. But as Jeb Brovsky, defender for the Montreal Impact (Major League Soccer), points out, the two games are “mutually exclusive” of one another.

“Technique, tactics, mentality, they all are different going into training and matches,” Brovsky said. “If you’re a good beach soccer player, it doesn’t mean you will be a good soccer player and vice versa.” 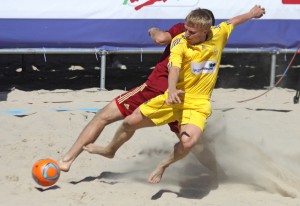 The most obvious characteristic that sets apart beach soccer from regular soccer is the necessity of having to keep the ball in the air. In regular soccer, the ball seems to be connected to both the ground and the player’s foot. As if on a string, skilled players are able to maneuver through defenders while dribbling a ball that often appears magnetically attached to the ground beneath. In beach soccer, however, the art of ball juggling becomes the true form of entertainment.

As opposed to a traditional 64-by-100 meters soccer field, beach soccer uses a much cozier pitch that ranges from 26-by-35 meters to 28-by-37 meters. On average, a soccer player runs anywhere from five to seven miles in a 90-minute match — a testament to the players’ endurance. Beach soccer demands more short-burst training from its players and an emphasis on using fast-twitch muscles.

“The surface and game is so different that it is less and more difficult in other ways,” Brovsky said. “Personally [as an MLS player], my calves, ankles and soles of my feet get very sore after playing on the sand for an extended amount of time.”

At both the amateur and professional level, beach soccer provides an active medium to rehab from injury. The sand not only offers a low-impact way to strengthen legs, but also helps players to improve agility and balance. When Taylor Bowlin, most recently of the National Premier Soccer League’s San Diego Flash, tore his groin last season, his club placed him with a host family in Redondo Beach, steps away from the sand.

“Adding variable sand fitness and training to a regular soccer player’s repertoire of offseason training and rehab is beyond beneficial,” Bowlin said.

Besides the physical components of the sport, its more underrated value comes from the strategy required on each and every play. A majority of the moves are “perfectly studied progressions,” and without proper technique — when it comes to ball juggling — surviving on the irregular surface of beach soccer is nearly impossible, according to Ponset.

The size of the pitch further differentiates beach soccer from regular soccer. A traditional soccer team is spread out, often leading to a lapse in communication that requires mental perseverance to recover. On the sand, however, the ease of communication puts less stress on each individual, says Bowlin.

Regardless of how popular the sport becomes in certain parts of the world, variables of climate and location will largely determine its growth in the U.S. Bowlin was able to rehab in Southern California because he was literally steps away from the sand; Brovsky, on the other hand, hasn’t played on sand — outside of basic running regimens to improve conditioning — since his college days.

As of 2010, approximately 39 percent of the U.S. population lived in counties directly on the shoreline, according to the National Oceanic and Atmospheric Administration. That percentage is expected to grow to approximately 47 percent by 2020.

Beach soccer’s growth will continue to trend upwards as a result of FIFA’s involvement. Since the sport integrated with FIFA in 2004, seven FIFA Beach Soccer World Cups have been played to date. The tournament has evolved into a bi-annual international competition. The 2017 World Cup, which took place in Nassau, Bahamas, crowned Brazil as the champion after its 6-0 victory over Tahiti.

Now that RazorFish, a full-service digital agency, is creating a beach soccer video game, it’s just a matter of time before beach soccer becomes a part of American pop culture. A sport that allows unlimited substitutions, offers dozens of scoring opportunities and provides an addictive atmosphere, beach soccer is, without a doubt, a sensible choice to be America’s next athletic obsession.