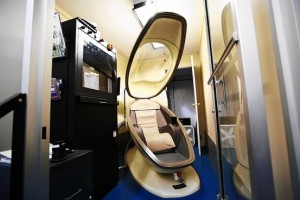 Powders, drinks, wraps, tape, gadgets, supplements…the list goes on with regard to the ways in which everyday athletes can get the upper edge, improve their training and performance and assist with recovery. Perhaps it’s time we added cellular fitness to that list.

Specifically, we’re looking at a process known as Cyclic Variations in Adaptive Conditioning, or CVAC™. The CVAC pod, as laid out on cvacsystems.com, is an egg-shaped, bobsled-sized pressure chamber that uses a computer-controlled valve and a vacuum pump to simulate various, changing altitudes and compressing the muscles at rhythmic intervals.

The key word in that last paragraph is changing. As opposed to some of the high-altitude chambers that many athletes are known to sleep in as a means of acclimating the body to functioning with less oxygen in the blood, the CVAC pod puts the body through hundreds of air-pressure changes, ranging from sea level to more than 20,000 feet, thus enhancing an athlete’s ability to adapt to a range of conditions. These pressure changes effectively compress the body in and out – blood, organs, everything – the way a plastic water bottle with the cap screwed on inflates and deflates as the pressure rises and drops.

These sessions – which last around twenty minutes, and are not intended as a substitute for your workout but do closely simulate the physiological reactions to vigorous exercise – are improving your athletic performance and recovery by improving circulation, draining metabolic waste, reducing inflammation, boosting oxygen-rich red-blood cells, removing lactic acid and possibly even stimulating mitochondrial biogenesis and stem-cell production.

Some of the greatest athletes in the world believe strongly in the benefits of CVAC.

Tennis star Novak Djokovic is a creature of habit and ritual. If you’ve ever see him serve, the excessive number of ball bounces before tossing the ball into the air isn’t something he does once in a while. It works for him, so he does it. Every. Single. Time. Djokovic has been vocal that CVAC, indeed, works for him, as he was quoted by the Wall Street Journal stating, “I think (CVAC) really helps—not with muscle but more with recovery after an exhausting set. It’s like a spaceship. It’s very interesting technology.” 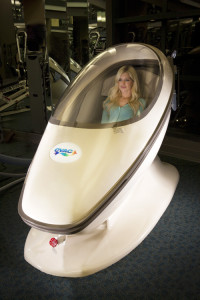 CVAC officials won’t reveal which Olympic athletes use the chambers or the price tag of the equipment. Athletes usually rent time on the pods at sports facilities.

“We found athletes don’t like to let their competitors in on what they’re doing,” said Mary Steinman, the company’s director of marketing, after the 2012 Olympics.

In 2006, the World Anti-Doping Agency ruled that such oxygen tents enhance performance and violate “the spirit of sport,” but did not add them to the list of banned substances and methods, saying they would wait until further studies were conducted. But it’s not just the pros that are getting into this.

The Sporting Club (http://thesportingclub.com/), located San Diego, is one of the first health clubs in California to offer Cellular Fitness to its members. Paul David, Sporting Club Director of Fitness, says, “Two of my triathlete clients have been using CVAC for a couple of years now, and not only have they both hit their personal best, but they are also on the podium consistently.”

“The results from my CVAC sessions are truly astounding,” Marcy T. Rogers, M.Ed., President and Chief Executive Officer of SpineMark Corp., told ATLX. “After just one session, my joint swelling, redness and “heat” in my extremities was significantly reduced.  With additional CVAC sessions, it continues to improve.  My sleep dramatically improved, starting with the first night after my session; I slept more soundly and deeper than I have ever experienced in my adult years.  One significant effect from CVAC is reduction in pain in my back region. I’m a believer!”

Getting an athlete to sit still is never easy. But if twenty-minutes a few times a week inside one of these pressure chambers can make as much difference as many athletes are claiming, you can bet the lines to hop in one of these pods will only be getting longer.