On July 23, 2013, Jon Sutherland, 62, of West Hills, Calif. suddenly held the longest active running streak in the United States. But he wasn’t ecstatic about it. Instead, the honor felt bittersweet.

The man who had been ahead of him was also the guy who inspired Sutherland’s streak. Mark Covert, 62, was ending his own historic streak on the 45th anniversary it began due to a debilitating foot injury.

“Mark sent out an email to his friends, and when I was reading it, I felt like somebody had punched me in the stomach,” said Sutherland. “I ran with Mark from ’68-70 [at Los Angeles Valley College] and he’s been a great friend ever since. He’s like the toughest guy I’ve ever met, and I thought he would end the streak one day when he broke a leg or had pneumonia or something.”

When the two met in 1968 inside a Valley College administration office, neither teenager had even the slightest inkling that they would go on to make history in the running world. It wasn’t even certain that they’d become friends.

Sutherland remembers thinking that Mark had “an intimidating aura.” “He had a shaved head, a Fu Manchu (mustache) and he’s wearing sunglasses indoors,” recounted Sutherland. “I thought, ‘God, that’s a weird-looking guy,’ and then that night at practice, I saw him again.”

Pretty soon, Sutherland realized that the initially frightening Covert was “really a good guy.” The duo became especially close when it became clear that they had similar work ethics. Basically, both trained like their lives depended on it.

“I gravitated to him, because he did a lot of miles,” said Sutherland. “I could relate to the hard work.”

“I have always liked to train,” added Covert. “Training, to me, was as much fun as the racing was, being able to challenge myself day after day with the big miles we would run and pushing hard often.”

Covert’s 45-year streak remains the longest running streak in U.S. history, according to the United States Running Streak Association. Sutherland, who began his streak on May 26, 1969, must run at least one mile every day for the next nine and a half months to best his longtime buddy. In other words, although he now holds the longest active streak, he has not yet officially caught Covert – who started approximately 10 months before him – for longest overall American streak.

It’s fascinating how Covert inspired Sutherland to begin running every day in the first place. The summer after Sutherland’s freshman year of college, his family moved to Las Vegas, and while he was there, he liked to write letters to some of his teammates. 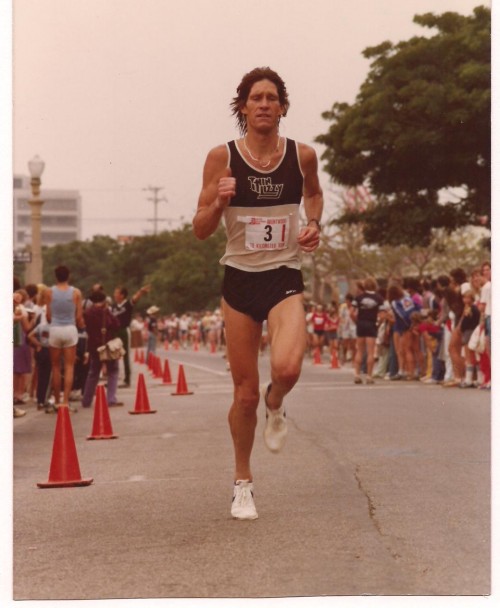 “You ran on your birthday? Christmas? New Year’s?” Sutherland asked. Once he learned his friend had run every day without exception, he was in. “I go, ‘Wow. I’m gonna try that.’ So I did it,” said Sutherland.

In the late 60s, running streaks weren’t that big of a deal, according to Sutherland. It was only when British runner Ron Hill reached the five-year mark – his streak began in September 1964 – that many articles began to emerge. “And then [when] Mark hit five years, people noticed that,” said Sutherland.

Beginning with the 10-year anniversary of Covert’s streak, a party was held every five years to commemorate the accomplishment. Not surprisingly, one particular guest has attended each and every one. “I’ve been to all eight of them, because he’s my buddy, and I have all the T-shirts to prove it,” said Sutherland.

For years, Sutherland has been the sidebar in stories about his friend. If he’s able to break Covert’s record in May 2014 – and barring a severe injury it appears that he will – the spotlight will shine directly on Sutherland.

Sutherland said he doesn’t particularly enjoy being the center of attention: “I’m the kind of guy that would go to a race with 5,000 people, win the race, and go home without the trophy. I didn’t want the attention, and I was happy that he’s had it all these years.”

Although Covert was clear in expressing his happiness for Sutherland, he didn’t believe much, if anything, would change between the two if and when Sutherland breaks his record. “We’ll be friends forever,” said Covert. “It wasn’t that I had this streak, and Jon was there and he had his about eight months later. I never looked at it like that.”

“Jon was just Jon. He ran with us, we were good friends, and when he goes 45 years and one day, I’ll look at him exactly the same.”

Over the years, the friends have barely seen each other except for the streak anniversary parties. There was no drifting apart. Life merely happened. Covert got married in his 20s and had children. Sutherland never married, became a music writer (rock, particularly) and got into coaching well after Covert did. Even then, they’ve always coached at different levels. For instance, Sutherland now coaches girls and boys cross country at Notre Dame High School (Sherman Oaks, Calif.), while Covert is Antelope Valley College’s coach, also in Southern California.

As a rock journalist, Sutherland attended countless concerts and didn’t typically go to sleep until 1 a.m., according to his estimation. By contrast, Covert generally started his morning runs at 5 a.m. in order to be finished before his team would practice at 6. 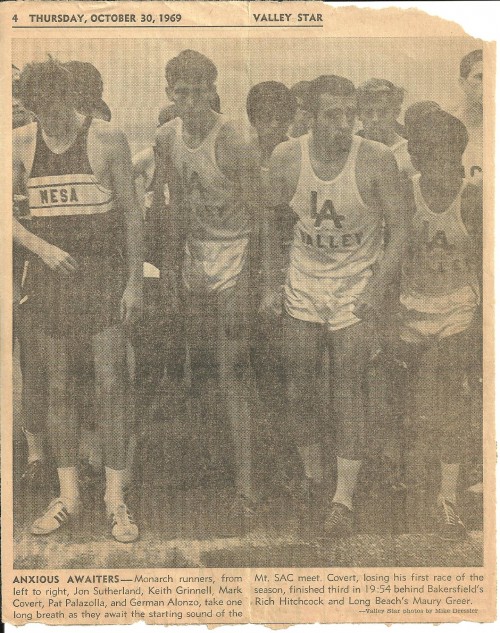 Sutherland has averaged 11.3 miles per day over his streak of more than 44 years, while Covert averaged nine during his own.

Unlike Sutherland, who has always considered himself to be a vocal leader, Covert leads by example.

Despite the differences in their lifestyles and approaches, these two men shared and will continue to share an extraordinary bond that was cultivated 45 years ago in a nondescript administration building.

Now that Covert’s streak has ended after 45 years, you would think he’d feel a void, something missing. Well, that’s not the case, according to Covert, who said, “I’m sure there’ll come a day when I miss the fact that I’m not going out on a run.It’s been about three weeks now and that day hasn’t come yet.”

Now that Covert is done running every day, he’s tackling a new challenge: riding his bike every day.

“I’ve just put something else in that hole where I can train. I’m still doing what I’ve done every day, and that’s working out,” said Covert, who’s now biking an average of 160 miles per week.

Meanwhile, his longtime pal is keeping the running going at a rate of about seven miles per day or 50 per week.

“If Jon can continue on for five years, 10 years, 15 years more, and he enjoys it and it doesn’t become drudgery to him or anything like that, good for him,” said Covert. “I’m happy for him.”

Drudgery? Not even close. Sutherland still lives for running.

“When I can only run a mile or two,” said Sutherland, “I just feel like my blood’s getting dirty. I feel like I’m going a little bit nuts.”

At the very least, in the interest of sanity, Sutherland isn’t stopping anytime soon and don’t expect Covert to stop biking, either.