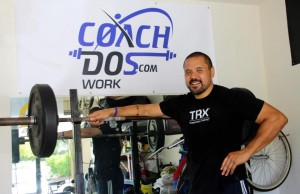 Coach Robert Dos Remedios has been involved in strength and conditioning for over 23 years. After completing his competitive football career at the University of California, Berkeley in 1988, he began training athletes on a full-time basis.

Coach Dos is a sought after international speaker on a variety of conditioning topics such as program design, cardio-strength training, olympic weightlifting applications, sport-speed development, explosive training, cardio strength metabolic training, and CHAOS™ speed training. Coach Dos serves as Director of Speed, Strength & Conditioning at College of the Canyons in Santa Clarita, CA, a position he has held since 1999.

Coach Dos is also the 2006 recipient of the NSCA‘s prestigious Collegiate Strength and Conditioning Professional of the year for 2006. This award is given to the top collegiate strength coach in the country, as voted by his peers.

In addition to contributing to Men’s Health, Women’s Health, Experience Life and Men’s Fitness magazines on a regular basis, Coach Dos’ first book Men’s Health Power Training (Rodale Books) was released in July 2007 and became a best-seller. His second book, Cardio Strength Training (Rodale Books) is also a best-seller. Coach Dos also has a large web presence with his contributions to coreperformance.com, livestrong,com, and his home site at www.coachdos.com.

You Just Got Better: In the training room with Robert Dos Remedios

College of the Canyons Athletics