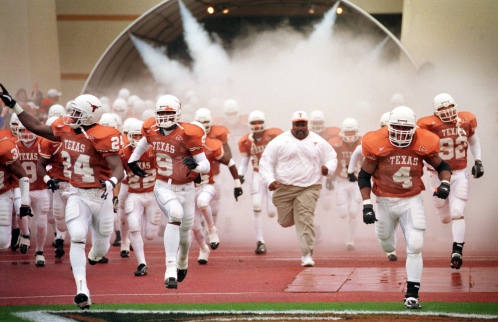 Jeff  “Mad Dog” Madden, who has been honored by his peers as one of the nation’s leading authorities on physical development, is in his 15th year as the assistant athletics director for strength and conditioning at The University of Texas.

Madden, who is the President of the CSCCa was one of just 10 coaches nationally to receive the title of Master Strength and Conditioning Coach at the CSCCa convention in 2001. The honor represents what the association says “is the highest honor that can be achieved as a strength and conditioning coach and represents professionalism, knowledge, experience and expertise.”

Madden, who oversees strength training and conditioning for men’s and women’s intercollegiate sports at UT, has worked with more than 200 NFL players (including 34 first-round picks) and 16 Olympians during his 30-year career at Rice, Colorado, North Carolina and Texas.

A three-year letterwinner and 1983 graduate of Vanderbilt, Madden was a high school All-American in his hometown of Cleveland. After earning a degree in sociology with a minor in psychology and secondary education and a stint in the USFL, he served as both a graduate assistant football and strength & conditioning coach at the University of Cincinnati in 1983. He then began his career in strength training and conditioning at Rice in 1984 and moved to Colorado in 1989. As assistant athletics director at CU, he coordinated strength and conditioning programs for all 15 of the Buffaloes’ intercollegiate sports. Madden then joined the athletics staff at North Carolina following the 1992 season.

Madden came to UT from North Carolina, where he served as associate athletics director for student-athlete development. At Carolina, Madden was responsible for 28 intercollegiate varsity sports and more than 750 student-athletes.

In 1988, Madden was certified by the National Association of Speed and Explosion (NASE). He was later certified by the International Sports Sciences Association (ISSA) in May of 1991 and was a unanimous selection to the ISSA Board of Directors, recognizing him as one of the world leaders in the profession of sports development. The Longhorns strength and conditioning coach has played a critical role in the design and creation of some of the nation’s leading collegiate strength and conditioning facilities. The Nassar Al-Rashid weight room is Madden’s fourth facility, and it contains state of the art, cutting edge equipment that is user-friendly and second-to-none in design implementation.

Madden is a member of the board of directors of Peak Performance USA, is on the editorial advisory board of Sports Speed magazine and is a certified expert by the National Association of Speed and Explosion. He also has a 602-pound bench press to his credit, making him one of the top bench pressers in the world.

The University of Texas Athletics