Mind Over Matter: The Ultra Mentality 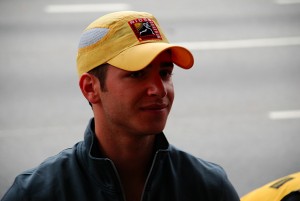 If you walked into Hamburger Mary’s in West Hollywood and ordered a drink from the bartender there, you probably wouldn’t think he was all that distinctive. You may notice he is attractive or that he looks physically fit, but most guys in West Hollywood are.

You also probably wouldn’t know that he went on a 20-mile run that morning or is training for the Mountainman Ultra, a 50-mile run in the Swiss Alps on Aug. 17, 2013.

So he is obviously pretty unique, but probably not for the reasons you would think. Zack Schor is like any other ultrarunner. People mistakenly think that ultrarunners are physically superior or more genetically blessed than the average runner, but that’s not it. It’s the same with any successful athlete. They set goals and they don’t stop until they reach them.

Now, Schor’s goal is to complete his first 50-mile ultramarathon. Coincidentally, he is doing it at an average elevation of 6,000 feet. But what makes him truly incomparable is not that he is in the physical condition to do it. It’s that he has set this goal and is working his ass off to accomplish it. 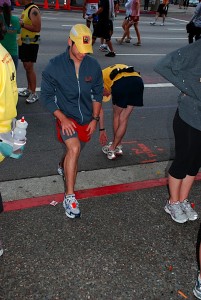 Schor hasn’t always been an endurance runner. Like many high school athletes, he ran to sustain his endurance on the soccer field and as a sprinter on the track, but never went farther than a few miles. Everything changed when the Chicago native saw a sign both literally and figuratively.

“For me a marathon was just something like ‘yeah maybe I’ll want to do that someday’ but had no real plans,” Schor told ALTX. “But I was in a CVS one night and saw a flyer for the [Los Angeles] AIDS Marathon, and pretty much went home and signed up before I could talk myself out of it.”

With work and other obligations, some days Schor would go for his training runs on just an hour of sleep, and though he managed to finish the marathon, it was not without challenges. Schor hit the dreaded wall around the 20-mile mark but with the excitement of the crowd finished successfully.

“It’s pretty incredible what the adrenaline is like of thousands of people watching by the finish line and cheering,” Schor said. “I remember going from shuffling along to sprinting past people.”

Although Schor was burned out from his work and training overload and didn’t run again for a year, there was a sense of accomplishment from raising $3,600 and running 26.2 miles that just wouldn’t go away. Schor signed up for another race and then another, and realized that if he could do 26.2 miles, he could go farther. 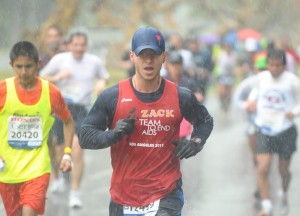 Schor did five races in two years including two 50-kilometer ultramarathons.“It’s definitely a powerful thing to be apart of these charity organizations and raising money for a good cause,” Schor said. “I’m never going to be the fastest marathoner, but maybe I can go a little farther than the average person.”

A little farther he will with his upcoming 50-mile race through the Swiss Alps.

“Maybe this is the crazy way that my brain works, but I’ve never not finished a race that I’ve started, and if I haven’t had that happen then I certainly haven’t reached my limit yet,” Schor said.

Ultramarathons offer a sense of accomplishment and sense of therapy unlike any other athletic event. There isn’t publicity or glamour in the races. Most of the times there are very few spectators that even watch. Most of the time you are running alone, and unlike the monotony of running on concrete with runners, fans and buildings, Ultras take place on trails. “It just becomes a much more introspective experience, exploring for your own sake, what you’re capable of, what you’re worth,” Schor said.

Schor shares the philosophy of most ultrarunners. They aren’t special or spectacular, they just work really hard, and set out with the goal knowing that it will take time and there are no shortcuts. “The difference between a marathoner and ultrarunner is so much more about willpower than just physical ability,” Schor said. “If you can run 26 miles, you can run farther; you just may not want to.” 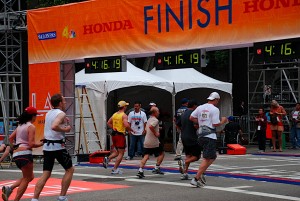 Schor does admit that getting into running takes time. Many people don’t keep up the consistency to actually receive any gains from each workout. “If you run two miles, and then decide you’re over it and don’t want to run anymore than that, and then you wait a week or two weeks and try to run two miles again, then you haven’t gained anything from running two miles the first time.” Schor said.

Another challenge to just starting off for runners is that they haven’t felt the thrill of completing the race that drives people to run again and again. “I think the first marathon is challenging because you don’t have the gratification of past marathons to fuel you,” Schor said. “If I’ve already finished a marathon, and I know what it feels like to cross that finish line, then I’m looking for that. That fuels me, that drives me, and that makes me want to go out on that training run to work toward that feeling again or to finish faster.”

What Schor, like many ultrarunners doesn’t want to hear is people telling him that they aren’t good runners or they don’t do it because they can’t. “No matter what condition you’re in right now, whether it’s a 5k or a 100-miler, you can do it,” Schor said. “It’s just a question of putting in the training.”

To accomplish his goal of completing the Mountainman Ultra, Schor knows that it’s going to be just as much of a mental challenge as it’s a physical one.

For more information about the Mountainman Ultra, check out their website here.

To find out more about Zack Schor and his journey, check out his blog.