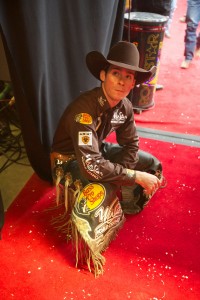 When it comes to dangerous sports, people tend to think about football and ice hockey because of the fierce contact. Those are sports where very strong and large men are crashing into each other with a similar amount of force as an automobile accident. But those athletes don’t have much on professional bull riders, who have to deal with an opponent that is as big as a car, and much less controllable.

It would be hard to imagine a sport that’s more dangerous than bull riding, as some of the toughest athletes in all of sports need to have the power and strength to hang on to a 2,000-pound bucking bull, as well as the quickness to get out of the way after they have either been thrown off or they jumped off of the bull’s back. Even though there are great risks, the thrill keeps them coming back.

“There is no rush out there that I’ve ever found that comes close to the feeling of getting on a bull and jumping off and the crowd goes crazy,” said Luke Snyder, who has competed with the Professional Bull Riders (PBR) for 13 years. “There is no feeling like being able to conquer a 2,000-pound animal.”

Bull riding is not just about being tough; these competitors have spent years perfecting their craft.  Preparing for competition is quite different from other sports.

“You can’t go out there and go to the batting cage, or play catch with your buddy, or run drills,” Snyder said.  “You have to do the actual real thing.”

The real thing does not mean heading down to the local cowboy bar and hopping on a mechanical bull. It means getting on a live bull that has no interest in cooperating with the athlete. There’s no way to simulate the real thing during practice like in other sports; these riders are doing the real thing every time they get on a bull, whether it’s for competition or practice.

Bull riders have to have a tight grip which requires a lot of upper body strength, they have to have strong leg and core muscles to squeeze tight against the bull, they have to know how to fall correctly, and they have to be able to get to their feet and run for protection as fast as they can. To be able to meet the athletic requirements, they are on a tough training regimen to get as strong as possible without putting on much bulk.

“None of us are trying to bulk up or get big,” Snyder said.  “We’re trying to be more strong, pound for pound, at a light weight…No matter how big we get in the gym, we’re not going to be able to out muscle a 2,000-pound animal.”

In the weight room, Snyder at 5’11” and 155 pounds puts a lot of focus on his legs and core by doing squats and leg press. On the PBR tour there’s a lot of travel involved, so he performs bodyweight exercises that can be done in his hotel room.

Being an explosive athlete is vital for a bull rider, so when Snyder runs he performs high-intensity interval training helping his quickness so that he can avoid the bull coming after him or landing on him.  Many bull riders do speed drills similar to what football, basketball, and soccer players perform.

“I really like the concept of yoga, because it is a lot of core strength and balance.  I saw a lot of good results in my bull riding from it,” Snyder said.

Injury prevention is almost a foreign concept for these athletes, as there is no safe way to get off of the bull. Either they are thrown off, which gives them no control over where they land, or they can jump off, which is a skill that they have mastered.

The bull cannot move unless it picks up its front feet off of the ground, so the rider tries to time his jump off when the bull is in a more stable position, which is only for a split second allowing the bull rider to control which way he flies off, and trying to land as far away as possible. But of course it doesn’t normally work out that way. Every bull rider has had serious injuries, and Snyder has broken a bone in every part of his body, including his neck.

Broken bones are a major issue for bull riders, and muscle tears are too, which is another reason why these athletes try to stay as lean as possible. 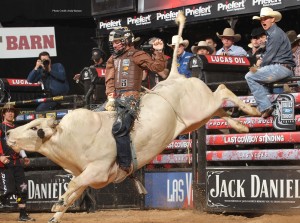 “The bigger you get, the more susceptible your muscles are to tearing,” Snyder said. “There are a lot of groin and shoulder injuries in this sport. If you get bulky, it is only going to add to that.”

At the age of 30, Snyder is considered old for a bull rider, but as long as he keeps his body in great shape through proper diet and exercise, he can continue performing in arguably the most dangerous sport.

For more information about the PBR, visit their website.