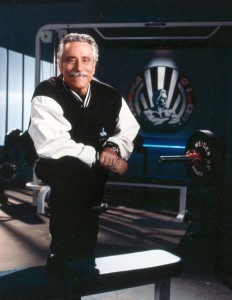 The fitness world mourns the loss of Joe Weider, who died March 23, 2013 of heart failure at the age of 93. The fitness guru, businessman and multi-millionaire boasts an incredible contribution to the fitness world publishing popular fitness magazines, co-founding the International Federation of BodyBuilders, manufacturing a line of sports nutritional supplements, and discovering bodybuilder, actor and former California Governor, Arnold Schwarzenegger.

Weider grew up in a rough neighborhood in Montreal, Canada and turned to fitness and weightlifting in his early teens as a way to fend off bullies. His passion grew from there. In the 1940s, Weider published Your Physique, which has since been renamed Muscle & Fitness, a still popular magazine to this day. He continued to build his empire with an extensive list of magazine publications including:

Weider’s business ventures certainly don’t end with his magazines. He also created a sports nutrition supplement line that he also began in the 1940s, and soon after started the International Federation of Bodybuilders.

Weider’s passion for fitness influenced the lives of many, but most notably inspired Austrian native, Arnold Schwarzenegger, into bodybuilding. Coincidentally, Weider not only inspired Schwarzenegger to pursue his passion, but also scouted Schwarzenegger at an event in Europe and sponsored his move to the United States. Schwarzenegger started out by earning 100 dollars per week writing articles for Weider.

“I will never forget his generosity.”

“Joe didn’t just inspire my earliest dreams; he made them come true the day he invited me to move to America…” Schwarzenegger said in a statement.  “I will never forget his generosity. One of Joe’s greatest qualities is that he wasn’t just generous with his money; he freely gave of his time and expertise and became a father figure for me.”

Schwarzenegger went on to state that he didn’t just help with his body building, Weider also kick started Schwarzenegger’s acting career as well. “He advised me on my training, on my business ventures, and once, bizarrely, claimed I was a German Shakespearean actor to get me my first acting role in “Hercules in New York”, even though I barely spoke English.” Schwarzenegger is one of many of whom Weider positively influenced, encouraged, and changed their life.

Survived by his wife Betty, Weider dramatically changed the landscape of the fitness arena, and will be dearly missed.