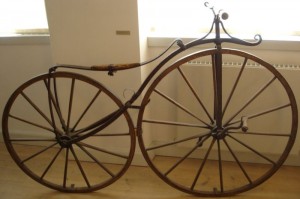 In 1817 Baron von Drais needed a contraption that would help him get around his royal gardens. His solution: two wheels on a wooden frame that he straddled. While he glided around, roaming the gardens, others were condemning his wild apparatus as a fad that would never catch on.

Fast forward to today. Cycling has become a major sport across the world. Von Drais could have never known that his critically scrutinized “impractical device” would be used by competitors to speed through France in the largest annual race in the world at an average of 35 miles per hour.

The bicycle’s transformation included a move to larger front wheels and a reversion back, as safety became a growing concern. By the 1860s, the Michaux Factory in Paris added pedals and the first modern bike was born. By the 1900s, bicycles were integrated into society for sport and recreation. Cycling gained popularity as the bicycle matured and became more functional for the everyday athlete.

Inaugurated in 1903, thanks to a marketing ploy, was the Tour de France: a 1500-mile race divided into six stages that – as the name suggested – toured the entire country of France. Now the world’s largest annual sporting event, the Tour has been held every year since its start except during World Wars I and II. Currently, the race covers over 3,200 kilometers, featuring teams of nine riders each.

Over time, because of unsuitable road conditions, road races were soon replaced with track races in England. And although road conditions weren’t necessarily the causal factor, Americans picked up the sport on tracks as well. 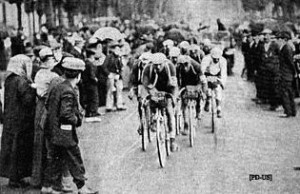 The endurance sport was constantly challenging the toughest competitors. In some places, racers would compete for six straight 18-hour days until people realized it was becoming inhumane. By the 1910s, competitive riders took to the track, abiding by a law (at least in America) limiting riders to 12-hour days. By the 1920s, track racing was the most popular sport in America. But as the long tough races were cut back, Americans began losing interest in the sport, and it wasn’t until the 1980s that it regained popularity.

Throughout the years, other types of cycling spun off of traditional road races. As road conditions improved, riders found themselves back on the racing pavement. Cyclo-cross, BMX riding, and Mountain Biking all have roots in cycling. 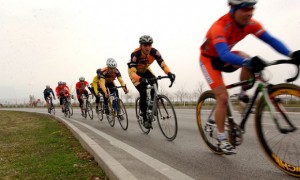 Cycling entered the Olympic arena in Athens, Greece in 1896 for men. Women joined in later, at the 1984 Olympics in Los Angeles. However, the sport hasn’t gained as much attention as an Olympic sport as it has through professional races.

It’s not just professional cycling that has found its way into American culture. People use bikes for enjoyment, transportation, and exercise. In 1972, bicycles outsold cars 13 million to 11 million, and bike thefts accounted for 17 percent of all larcenies.

Although there is a significant difference between Von Drais’ initial contraption and the modern bicycle, surprisingly the mechanics really haven’t changed much since the early 1900s. The major differences include lighter, more innovative materials that form stronger, lighter bicycles with much heftier price tags.