Origins of BMX: So Cal Scene to Olympic Stage 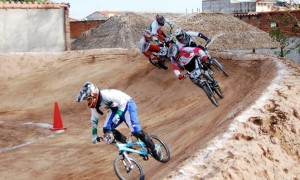 It is said that imitation is the most sincere form of flattery, and few sports have imitated more than bicycle motocross, more commonly known as BMX, which is basically motocross without a motor. BMX has grown substantially from its roots of children pretending to be the motorcycle superstars of the 1960s and 70s to its entry as a medal sport at the 2008 Olympics in Beijing. Despite its growth from a local phenomenon in Southern California to worldwide event, BMX has remained relatively unchanged since its first days. At its core, it’s still just riders pedaling through the dirt, hurtling around hairpin turns and reaching top speeds and incredible heights, much like its motocross predecessor.

BMX entered the SoCal scene as a product of children’s imaginations in the summer of 1969. Led by teenager Ronald Mackler, a seasoned motocross rider,  a group of Los Angeles boys organized the sport’s first races. Over the course of a couple months, West LA’s Palms Park had become historic grounds as the site of the world’s first BMX action. By 1973, riders convened at Palms Park once a week to compete over the course of 10-week seasons throughout the year.

Scot Breithaupt, a fellow Californian, helped spread BMX across the state after founding the first governing body of the sport, the Bicycle United Motocross Society (BUMS), in November of 1970. At just 14 years old, motorcycle-enthusiast Breithaupt, who originally named BUMS after the individuals gathered around his first course, designed an obstacle-laden, 1300-foot track before hosting the first California state championship just two years later. Eventually BUMS oversaw seven tracks around California and ran the first professional race at Saddleback Park in Orange County in 1975.

With the release of Bruce Brown’s legendary 1971 motorcycle racing documentary, On Any Sunday, which briefly depicts kids racing around on bicycles, BMX had truly created national recognition of the burgeoning sport.

Picking up where previous BMX sanctioning bodies left off, the American Bicycle Association quickly grew after its 1977 start. The ABA, created by Gene Roden and Merl Mennenga in Chandler, Ariz., asserted itself as the largest governing body in the United States within its first few years and still continues operation to this day as USA BMX. Among the ABA’s most important contributions to the sport include the electronic gate starting line system and the National BMX Hall of Fame. 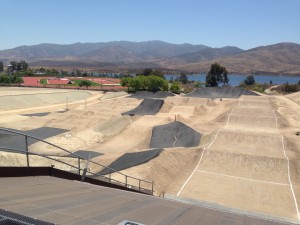 Over the next decade, sanctioning bodies popped up around many Western countries, including Australia, France, the United Kingdom and the Netherlands. Eventually international groups began boasting BMX before the century-old Union Cycliste Internationale (UCI) created a division for motocross racing in 1993. The UCI, the world governing body for multiple types of cycling, also began hosting the BMX World Championships in 1996.

BMX entered a new era in 2008 as it enjoyed its first showing at the Beijing Olympics, an experience that helped spread the sport across the globe. Three Americans, two male riders and one female competitor, pedaled to medals, but Latvian Maris Strombergs grabbed the title as the first male gold medalist and France’s Anne-Caroline Chausson earned the same honor on the women’s side.

Although created for circuit racing, BMX has proven popular both on and off the course. Originally groups of riders competed on road bikes, especially the Schwinn Sting-Ray, but eventually bicycle manufacturers caught on to the movement and created BMX-specific models. With the new BMX models, riders took advantage of the exceptionally strong but lightweight frame and created a new discipline of performing various tricks both on ramps and flat land. Mirroring skateboarding’s evolution from riding to stunt exhibitions, BMX freestylers carved out their own niche and are now some of the most popular performers at annual competitions like ESPN’s Summer X Games.

Perhaps in a nod to its youthful start, bicycle motocross has remained one of the simplest sports, requiring just a makeshift track and a bike to compete. But its enthusiastic fan base and evolution toward the global stage have ensured BMX will be around for years to come.