History and lore of triathlons 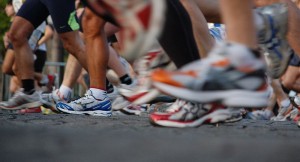 The first documented triathlon was in France in the 1920s named Les Trois Sports for “The Three Sports.” The sport wasn’t picked up in the U.S. until unknowingly a similar event was put together in San Diego.

The event included 46 participants and took place in Mission Bay, San Diego, on September 25, 1974. This triathlon consisted of a six-mile run, a 5-mile bike ride and a 500-yard swim.

Jack Johnstone, one of the founders, recounted that the trophy shop had to ask how to spell “triathlon.” After Johnstone looked it up in the dictionary and realized the word didn’t formerly exist, he based it off of similar words to come up with its spelling.

The competitors all went out for pizza after the event.

The Ironman Triathlon, one of the most famous and recognized type of triathlons, consists of a 2.4-mile swim, 112-mile bike race and a 26.2-mile run.

Although there is no documented proof, the first Ironman was said to commence because of a friendly rivalry between the athletes of the different events. Swimmers thought swimming was the most challenging, while bikers and runners thought the same about their events.

The first Ironman was developed through the combination of long standing Hawaii traditions: the Waikiki Rough Water Swim, the Oahu Bike Race and the Honolulu Marathon.

The first Ironman only had 15 participants and 12 finishers. The next year boasted only 14 competitors. But a Sports Illustrated article about the Ironman gave a boost to the sport’s profile, and by the 1980s, hundreds of people enlisted in the event. The Ironman has blossomed to thousands of competitors. Although there is no official world championship for the Ironman, most consider this race the unofficial world championship.

Triathlons in the Olympics

The Triathlon became an official Olympic sport at the 2000 Sydney Olympics. To compete in the Olympic Triathlon, participants must qualify for their national team. Currently, Australia tops the list of Olympic Triathlon medal winners.

The Epic5. In 2011, two men, Richard Roll and Jason Lester set out to complete one crazy idea. Their goal was to complete five Ironman races in five days on all five islands of Hawaii. Though they coined their attempt an adventure and not a race, it was still a grueling week that truly was a testament to the craziness of triathletes. Although they didn’t quite reach their goal, due to mechanical issues and sheer exhaustion, the two managed to complete five Ironman courses on five different islands in seven days.