Learn Parkour in the Safety of a Gym 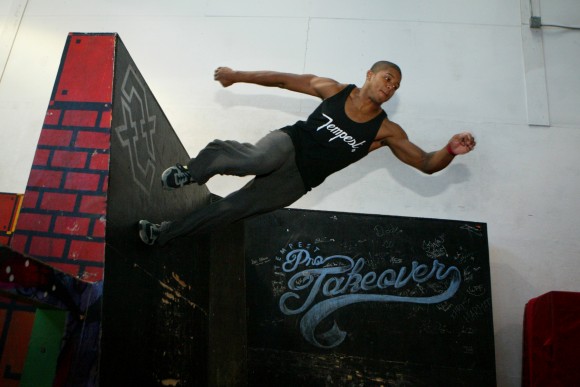 Parkour has been one of the most fascinating forms of athletic expressions over the past decade, ever since the Jump London documentary caught the world’s attention in 2003. Many people have marveled at these athletes running and jumping over and through obstacles in the concrete jungles of urban cities.

As inspiring as these movements are to watch, most people, including athletes, who are considered to be the fittest in the world, typically would not try any of these movements, especially in an environment where the injury factor can be so high. But that is changing as parkour gyms are sprouting up all over the world, offering a safe way to learn movements that have captivated the imagination of many people, and providing participants a great workout.

Parkour athletes take to the streets, but for people who want to get in a great workout and learn some really cool movements while being in a safe environment, parkour gyms can offer a lot when compared to the more run of the mill gyms. Parkour gyms are pretty much huge playgrounds that will push the body to new limits.

“This is more enjoyable because you have freedom, whereas if you are on a treadmill or you’re in an aerobics class, you’re kind of just doing whatever the instructor says,” said Darryl Stingley, a professional parkour athlete and instructor at Tempest Freerunning Academy in Los Angeles. “Or if you’re on a treadmill, you’re just staring at a wall or at a television while you run. In this, it is very mental. You have to overcome fears, and at the same time you have to understand how your body works.”

Stingley grew up playing soccer and performing martial arts, but when he saw Jump London, he was hooked and he set out to learn how to maneuver his body over and above various obstacles.

“It was tough in the beginning, because a lot of the movements were things that you don’t normally do or see,” Stingley said.

“Nothing that I did in my average sports life transferred over to this, so it was kind of difficult to make the change and try to get more body control. But the more you do it the more it becomes natural.”

Stingley may have struggled in the beginning, but now he looks like a super hero as he is running up walls, flinging his body above pull up bars with ease, and jumping over obstacles without any fear.

For body composition, Stingley and the other instructors at Tempest Freerunning Academy have some outstanding physiques. Their goal is not to get big and bulky, but to add as much strength as possible, and become explosive producing a lean body. They perform advanced calisthenics for the most part, doing a lot of pushups, pull ups and other body weight exercises for their upper body. The muscle up is a key exercise as it teaches them how to hold their body in high places. For leg training they do a lot of body weight squats and lunges, and they also mix in some work in the weight room. 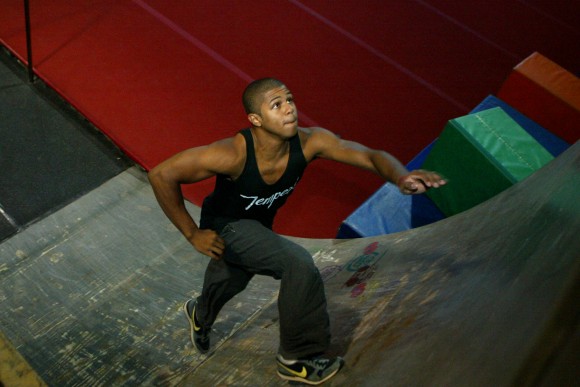 Plyometric training is key for parkour athletes, as they have to leap over objects, and being quick on their feet is important because they have to generate a lot of speed before they perform their jumps.

Athletes from other sports, especially CrossFit, have migrated to parkour as a change of pace from their normal routine.

Not only are professional athletes from other sports taking up parkour, but people who just want to have some fun while getting in great exercise are jumping right in. Most of the people who sign up at Tempest are not athletes of any kind, but Stingley points out that there is no experience required to learn how to do this.

“When we teach our classes, we start at their level,” Stingley said.

“If they’re basic and can barely walk on all fours, can barely do a roll, then that’s where we start with them. We cater to the individual, but we also want to get them a good workout, so we keep them moving.”

More men are taking up the challenge than women, but the women who are participating are doing extremely well, and they can do just about anything that the men can do.

“Some of the women that we have here, and have been coming here for a while, are some of our more advanced students,” Stingley said.
Unlike in the weight room, where men can out lift women, in body weight sports women can do pretty much anything that a man can do, which makes this form of training appealing to the women who have taken it up.

The participants who are having the most fun are children, who do not have the same fears of being injured as adults do. Parkour in the gym is safe for them, and extremely fun.

The great thing about Parkour is that people of all ages can have a great time at these gyms, which are pretty much big playgrounds, so it is not the run of the mill workout. It challenges the body in a very different way than what people normally do for their workout, and there is a sense of accomplishment when learning maneuvers that most people never think about trying.

This sport is gaining popularity, and with these new gyms, this parkour is a great addition to a workout program.

Parkour 2015-03-08
atlx
Share !
Previous: Hit the Hills for a More Intense Running Workout
Next: Rock Out, While Working Out