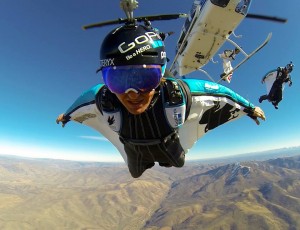 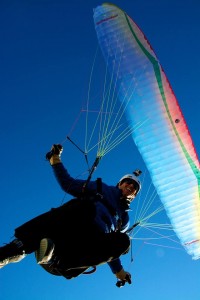 Along with his best friend, Neil Amonson, a professional skier our of Tahoe, Ca. by the name of JT Holmes, and Jesse Hall from Colorado, Marshall is contracted with GoPro to promote its cameras by flying over, or dropping in on, 12 major public events throughout 2014. He can’t say where, exactly, they’ll show up, but think big. Think Super Bowl. Think World Series. Think about those crazy guys you’ve seen flying over, or parachuting into, boxing matches and football games, and imagine actually getting paid to do it.

In talking to Marshall, there is no denying how much fun he’s having. But as is the case with anything worth doing, it’s not all fun and games. This is dangerous stuff, after all, and there is a lot of hard training going on behind the scenes. Marshall spends countless hours staying in shape by running mountain trails and putting himself through CrossFit workouts, and he credits yoga as being one of the most integral aspects of both his life and career.

“It bothers me more than anything to be labeled as an adrenaline junkie,” Marshall says. “That sounds like someone who is reckless.”