The Westgate hotel, located in the heart of downtown San Diego, is one of California’s most beautiful resorts. Magnificent antiques. Crystal chandeliers. French tapestries and Persian carpets. Completed in 1970, it’s been designed as a re-creation of an anteroom in the Palace of Versailles, and restaurants like Le Fontainebleau and the Westgate Room, the property’s elegance and dining go hand it hand.

Recently voted the “Best Seafood Restaurant” by San Diego Reader Magazine, the award-winning seafood at the Westgate Room is the result of James Beard recognized chef Fabrice Hardel, who grew up on the coast of France. “I love seafood” he says with a smile, his French accent making it sound more like I zove zeafood. “I have been around it my whole life, cooking it since I was sixteen.” 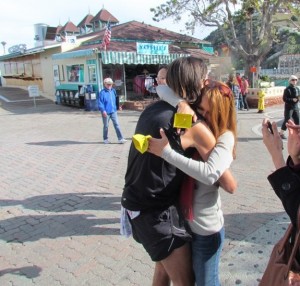 Fabrice, now 40, is a very calm, very reserved French chef. Overseeing a kitchen of 56 people, from Sous-chefs right on down the line, he’s the main reason the Westgate’s awards shelves remain full. And he’s got energy to spare. Seven days a week, at or before 6 a.m., Chef Fabrice is on mission trails in east San Diego for a two- or three-hour run that includes elevation, cross training, and one day a week, speed work, which equates to a measly six miles on a relatively flat surface.

“With my work, I know when I go in, but I never know when I can leave,” he says. “It gets busy. It depends on our guests. I must make time in the morning to train.”

This past weekend, Fabrice was one of about 150 to run the 50-mile trail race called Old Goats.  The race has an elevation of 13,423, and is rated one of the toughest 50-mile trail races in the Country. The modified figure-eight course starts and finishes at Blue Jay Campground, located in the Trabuco region of the Cleveland National Forest. This race is not for the squeamish, the easily intimidated, and it’s certainly not for the undertrained. Against very worthy competition, Fabrice managed to fare pretty well. He finished first.

Fabrice says he was always a bit of a runner, but never thought of himself as very fast. In 2007, at 33 years old, he decided to try the San Diego Rock ‘n’ Roll Marathon.

“It was a little challenge for myself to see if I could finish,” he said. “I just did a basic beginning training plan.” He finished the marathon in less than three hours. 2:53:00, to be exact. “(But),” he points out, “I underachieved my goal. I was running to stop smoking, and at the time I finished the marathon, I still smoked. I was not competing at the time I just wanted to enjoy myself and run.”

Fabrice begin to read more and more about running, and when training, he would do far more running than most plans called for. “I idolized the ultra marathoner winners and never dreamed I would be one of them.” Well, so much for that thought. In 2009 Fabrice took on the Avalon 50-miler, finished second, and it was at this time that he “started to get competitive” with himself.

“Just to see how fast I could really do this,” he says.

When it comes to ultra-marathons, there may be 150 runners at the start, but many times only half of that number actually make it to the finish. If you are one of the runners who pass the test, there is no press or cheer station waiting for you. These races are almost as hard to watch as they are to run. Serious commitments. It’s often just your few loved ones and a few race officials waiting at the end. Fabrice’s wife, AnaMaria Hardel, is his biggest fan and composes his, shall we say, pit crew.

“Ana is my moral support,” he says. “It’s so important to know someone is waiting for you that cares that you’re okay. It keeps me going. She has food ready for me. She’s only missed two races, and those races did not go well.”

She must not have missed the recent 2014 Avalon race.

One of the most challenging elevation races, Fabrice finished this year’s 50-miler in 11 hours, 44 minutes and 19 seconds. Guess how many people finished ahead of him? None. These conditions are not easy and weather can be dicey. People left with broken legs.

A lot of things make Fabrice the athlete that he is, first and foremost his dedication. But as he says, you can’t overlook the importance of your equipment. “Shoes,” he laughs. “You can overcome mental blocks, but if you get blisters it ruins your race.”

He prefers Salmon http://www.salomon.com/us/ for his trail shoes and Adidas for his road shoes. He puts up to 1000 miles on a single pair. No one sends him endorsements. No one has commercials for the running chef guy who’s out there three hours a day and seven days a week, even if he’s winning events that barely half the entrants even manage to finish. But he would never say a word. “I just enjoy running,” he says. Fabrice likes to track his workouts with the Strava app. “It’s like a Facebook for runners, you know what the competition is doing.” He prefers the Garmin application for training. He also started to blog about this dark, cold, almost empty races even before he was winning. The ultimate races as an ultra runner.

In July Fabrice is headed to run the North Face 50-miler in Ecuador. After that it’ll be the San Diego R’n’R marathon, and in September he takes on the Wastsch 100-miler, which, with its constant elevation changes, is the second-hardest ultra course there is. Last on the books will be the Chimera 100-mile mountain that … wait for it .. he also won in 2013.

Back in real life, in the kitchen, it’s quite the opposite picture of the one we’re painted on the hit show Hell’s Kitchen, with yelling and people throwing things under stress. Fabrice is graceful, calm, a serenity he likes to think comes from, among other things, his training outlet.

It’s debatable how you would first describe Fabrice to someone. Is he one of the best executive chefs, or one of the best ultra-marathoners? You have to assume that ultra running – or rather, ultra-winning – makes leading a kitchen seem easy. Then again, maybe it’s running the kitchen that makes 50-miles races seem easy.

Who knows. It’s all amazing either way.

2017-10-18
Sarah McWilliams
Share !
Previous: What kind of junk is in your trunk?
Next: Wellness Programs for the Modern Company