Why the Spartan Race Stands Out 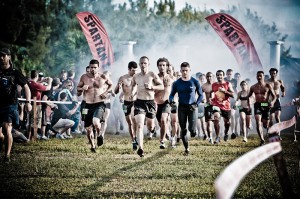 Adventure races have gained in popularity over the past few years as a way to get out of the gym and change up a routine. Check local events or your local GroupOn, and you’re bound to see marketing efforts for color runs, zombie runs and adventure runs.

One run that stands out is the Spartan Race. Created in 2001, the Spartan Race Series marries obstacle races and mud runs for a fun yet challenging way to spend a Saturday. It has different levels with various race lengths and obstacles, which can challenge everyone from everyday athletes all the way to highly trained elite athletes. The waiver of the Death Race explicitly states, “I may die.”

Spartan Sprint is first level of the Spartan Series. This race is over three miles long and includes more than 15 obstacles. It’s easy enough for beginners, but challenging enough for the weekend warrior. According to www.spartanrace.com, “This 5K race is comprised of mud runs, obstacles, trail racing, physical challenges and mental challenges.”

The second race in the series is the Super Spartan. This race is over eight miles long and has 20 obstacles. Similar to the Spartan Sprint, it involves obstacles, trail runs and mental and physical challenges. This event also includes live music and a catered meal after the race is completed. Super Spartan also offers its 21 and over participants a free beer at the end of the race. Although it may not be what experts recommend for recovery fuel, after getting a face full of mud, it probably tastes pretty good.

The next level after Super Spartan is the Spartan Beast, which over 12 miles long and includes 25 obstacles. It’s considered the “race from hell.”

This event lasts over 48 hours and includes mud runs, obstacles and physical challenges that can break even the strongest and most mentally tough athletes. This event claims only a 15 percent completion rate.

With its inauguration in 2005, the race is held annually comprising of a 40 mile course through the Vermont woods. Some of the obstacles in the past included cutting a bushel of onions or carrying large rocks for two hours. Another obstacle was like a first grade class assignment, only this one was more exhausting. Runners were told to memorize the first 10 presidents of the U.S., hike up a mountain and then recite the list. Participants have no idea what the race will include until they are already in it.

Joseph De Sena, the founder of the Spartan Race and an adventure junkie himself, eventually hopes the race will become an Olympic event. The Spartan Race has had a tremendous jump in participants since 2010, so De Sena can certainly share that with an Olympic committee.

One well known company that has taken notice is Reebok, which found that the Spartan Race had specific parallels to their “Live with Fire” campaign. Reebok is now producing the official apparel, footwear and accessories supplier for the Reebok Spartan Race Series.

The partnership was an obvious move from both camps. Reebok recently also partnered with CrossFit helping to promote the “Live with Fire” campaign that encourages athletes to break away from their everyday routine to become both physically and mentally stronger. With the large crossover that exists between CrossFit and adventure racing, this new partnership is an obvious fit for Reebok.

Many people turn to adventure racing as an alternative form of fitness to their usual everyday routine. As it gains in popularity, there seems to be a lot more in the works for the Reebok Spartan Race Series.