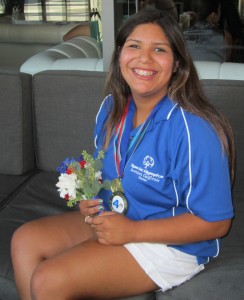 Meet Jenna Ramirez. When she is not being mistaken for America Ferrera, the “Sister of the Traveling Pants” and “Ugly Betty” star, she is competing, and most of the time winning in water polo and swimming at Eagle Rock High School as well as soccer and swimming for the Special Olympics of Southern California. Jenna embodies what it means to be a true star.

Jenna was diagnosed with mild mental retardation at a young age after suffering a grand mal seizure that stopped her breathing, subsequently causing permanent brain damage. In elementary school her mother and father discovered the Special Olympics through a program at the area schools. Having an active family, it seemed like playing sports would be a great way for Jenna to get out and participate in something outside of school. She began participating in swimming and soccer. Now, ten years later, Jenna has too many gold medals to count.

Her parents were as surprised as anyone at Jenna’s swimming accomplishments which include four gold medals in the Regional Games. Jenna’s father, Christian Ramirez, who also is a coach for the Special Olympics said,

“She’s the fastest freestyler in the 100-meter freestyle swim in all of Southern California. Swimming was one of the activities offered and she just took to the water. It’s her thing apparently, we had no idea.” 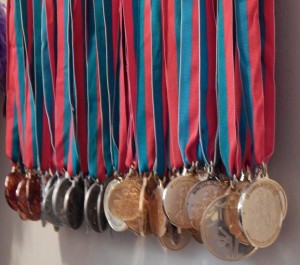 A favorite to win the gold in the Summer Games in her favorite event, the 200-meter freestyle, Jenna’s dreams were derailed when she broke her ankle while sliding in a recent baseball game. Now stuck in a wheel chair for the next three months, Jenna wheels her own chair in an effort to work out her arms since she cannot work her legs with her current injury.

Her commitment to her sports is unparalled. Before her injury, Jenna would practice sometimes over six hours a day between her school sports and the Special Olympics. Jenna said, “I run, I work out with my dad, I ride the bike, I do pushups and sit ups.” One of the most common misconceptions about Special Olympics’ athletes is that they do not work hard or that they are not competitive. That could not be farther from the truth. 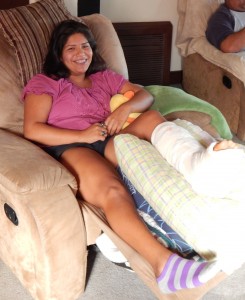 Jenna’s father, who coaches Jenna as well as the girls’ varsity basketball team at Jenna’s high school designs his practices the same way no matter who or what he’s coaching. “I do a lot of drills…we focus on skills, skills, skills.” And he does not go easy on his Special Olympic athletes either. Christian said,

“I could take a varsity athlete and put them through one of my [Special Olympics] practices and they don’t make it 20 or 30 minutes…I set the bar high and I’ve never been disappointed.”

Another misconception about the Special Olympics is that it’s not real sports; however, the athletes learn the sport as it’s currently played. Tina Corona, Jenna’s mother, who also volunteers as the Special Olympics’ area director, stated, “We’re teaching them the real thing. There are rules and regulations that they have to meet and follow.” 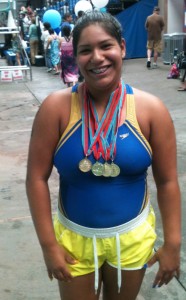 The assumption that the Special Olympics competitors aren’t ‘real athletes’ was dispelled completely when Jenna’s older brother, Anthony, decided to race her in swimming. A football and basketball player himself, he challenged his baby sister to four races. Although he narrowly beat Jenna in the first race, by the third race, he had to forfeit. Anthony said, “I had to get out of the pool. I quit. I was going to pass out.” Jenna completed the rest of the races on her own.

Jenna does not quit. As the goal keeper for her soccer team, her father cites a specific incident that proves her commitment and her capabilities. During the Pasadena soccer area games, Jenna took a corner kick to the face that knocked her down completely. Before her father could see if she was okay, or to tell her to get up, Jenna was back on her feet ready to go.

Her commitment level and passion makes her current injury especially difficult for Jenna. Tears formed in the 18-year-olds eyes as her father discussed her missing this year’s Summer Games. 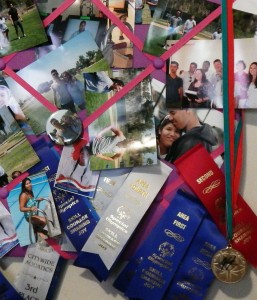 But, as the captain of her team, Jenna still attends practices and cheers on her teammates to make sure they are still working hard to have a chance at more medals during the Summer Games. She will be there this weekend, cheering loudly for her teammates.

Jenna’s hard work and commitment also earned her the most inspirational athlete for her high school water polo team. Jenna does not just work hard, she is a role model for those who meet her or have the privilege of being her teammate.

As if Jenna’s resume isn’t impressive enough, you can add celebrity to it as well. Jenna has been in a number of Public Service Announcements for the Special Olympics and has a photo album jam packed with pictures of her rubbing elbows with celebrities such as Johnny Knoxville, Joe Jonas and the cast of Modern Family.

If Jenna keeps it up, pretty soon people will be telling America Ferrera that she looks like Jenna Ramirez.

2013-06-06
atlx
Share !
Previous: Origins: The Tale of the Marathon
Next: Special Olympic Volunteers: The Ramirez Family