Clearing the Hurdles: From Life to the Track 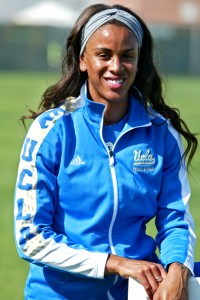 Sprinter Turquoise Thompson has the genetic make-up of a superior athlete. Her father, Donn Thompson, who also ran track at UCLA, had an opportunity to compete in the 1980 Olympics, but the U.S. boycott of the Summer Games in Russia took away his chances of competing. Her mother, Lori Smith-Thompson, who ran track at Long Beach State and San Diego State, made it to the U.S. Olympic trials in 1984. Thompson’s three older brothers were all competitive athletes on a high level.

Thompson is clearly gifted genetically, but one aspect of her genes would stop most athletes right in their tracks. She has the sickle cell trait, which makes it incredibly difficult to excel in sports. She does not have sickle cell anemia, or sickle cell disease, but her condition is serious. Normal blood cells are moon-shaped, but Thompson’s blood cells resemble a crescent moon, limiting the amount of oxygen that gets to her muscles during physical activity and causing severe cramps and muscle spasms.

“Sickle cell can cause me to literally drop dead while exercising,” Thompson said. “I don’t fear that, not at all. I fear cramping more than I fear dying from it. I don’t know why. I just feel that I’m here, I’m doing well in life, and I’m not going anywhere.”

Even with this condition, Thompson has a competitive drive that allows her to overcome it. 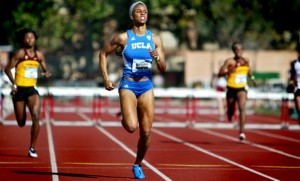 She started running track at five years old, and when she was seven her parents started a track club called Swift Performance. Being part of an athletic family played a major factor in her sports success. “It was a very competitive household,” Thompson said. “Everybody had to try track. We all did it. Some of us stayed in it, others didn’t. But sports was pretty much a forefront for the house.”

There were many lessons to be learned through sports: Lessons that can be used in all aspects of life.

“Being in an athletic household helped me as an athlete in terms of being tough, being strong-minded,” Thompson said. “I can remember plenty of pep talks, or just talks in general about staying with things, not giving up. I think that has played a huge part in my athleticism. I have had so many downfalls and obstacles. I just always remember never to quit and try to turn it around.”

Thompson demonstrated great athletic abilities as a child on the track, but unfortunately they did not cross over to other sports, like basketball. “I was not good at all,” Thompson laughed. “My mom was the coach of the team and she never put me in. I would bounce the ball and it would just roll off my foot. I would get in the game… just not as much as everybody else.” Thompson was not upset with her mother for her lack of playing time on the court because there were greater plans for her.

Thompson was becoming a track star. She won Junior Olympic gold medals in the 100-meter and 400-meter dash, setting a record in the latter.

Thompson’s mother was also the coach of her high school’s track team. Having athletic parents, and being coached by them, helped her thrive. “For me it was a huge positive,” Thompson said. “They understood what I was going through and they knew just how far to push me, and how far not to push me so that I wouldn’t want to participate in sports anymore. They knew what they were doing.” 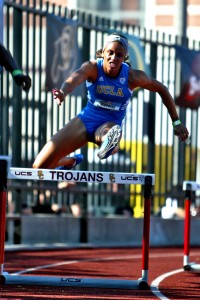 As she began to crave a new challenge, Thompson decided to try the hurdles, an event her mother ran in high school and college, because it looked fun. Still in high school, Thompson continued to compete in the 400-meter dash and excelled at the 300-meter hurdles. By the end of her high school career, Thompson was the nationally ranked California state champion in the 400 and a member of the state title-winning 4×400-meter relay team. As a hurdler, she was ranked first in the nation in the 400 (where she set a Junior Olympic record) and second in the 300-meter hurdles.

Thompson is turning pro this summer after graduating from UCLA in only three and a half years. She plans to stay in Los Angeles long term to attend grad school at UCLA — her coaches Jeanette Bolden, Bob Kersee, and Johnny Gray all coach there — and because she has a great support system in LA, from family members to other professional athletes. Olympic gold medalists Dawn Harper and Allyson Felix both train at UCLA, and Thompson has constant interaction with them. Harper especially has acted as somewhat of a mentor to the standout athlete.

Even though Thompson has faced obstacles that would give most people an excuse to give up, namely the sickle cell trait, she has a positive frame of mind. That quality, paired with her athletic dominance, has the potential to lead her to Olympic glory.

2013-06-20
atlx
Share !
Previous: How Do I Know if My Achilles Is Torn? KJOC Orthopedic Surgeon Weighs In
Next: 4 Summer Additions to the Adventurer’s Bucket List