Train with Intensity by Limiting the Rest 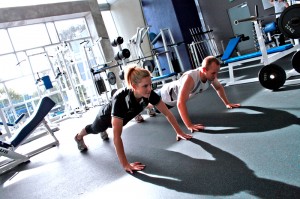 Over the past couple of decades, the gym has been transformed from a place where an exclusive group of muscleheads pounded iron all day long to a place that is friendly to the masses. Now-a-days, the gym’s social scene is nearly as important as the state of art equipment it provides. There are plenty of distractions with televisions blaring ESPN, Good Morning America, or any other popular show being broadcasted to folks trying to improve their fitness level. A number of facilities will even allow people to change the channel themselves.

Then there are the folks who show up just to talk to other people, like they are at work by the water cooler.

As convenient as many gyms make it, misinterpreting your workout for a social hour will not lead to positive results. For measurable results, intensity is the key. If you want to attain your fitness goals, stop watching television or talking shop with other people who are working out. Instead of talking about how many sets you can do on the deadlift, get back on the deadlift.

When I asked John Brown, two-time Mr. Universe and three-time Mr. World as a bodybuilder, if he would ever take a few minutes to talk or hangout between sets, he was almost offended.

Whether your goal is to gain weight, lose weight, build the best body possible, or just improve your fitness level, the principles are the same.

“The intensity is important,” Brown said. “My theory is that you have to take minimum rest between each set. When I’m doing bench press, and I super set it with incline bench press, once I finish the bench press, I walk right over to incline press. If it takes me ten seconds to get there, than guess what? I’m up in ten seconds. That’s one set.  Then in-between those sets I would rest another 30-45 seconds, or whatever it took to get me through the next set. But try to minimize the rest between sets. That is the key to getting bigger and stronger, quicker. That right there.” 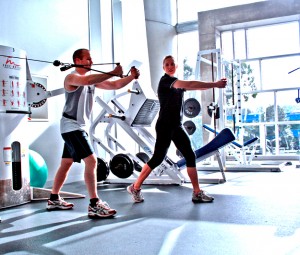 Since not everyone has aspirations of being as big as a bodybuilder or as fit as elite athletes, the rest period will slightly differ. But in no way does that mean take five minutes off to watch the sports highlights, or to catch up with friends.

Trainer, Andre Woodert, who works with three-time Olympic gold medal winning sprinter Allyson Felix, as well as professional football and basketball players, concurs with Brown. However, Woodert points out that the amount of rest between sets can depend on your goals.

For anybody who is looking to pack on muscle or lose fat, Woodert believes that they should follow Brown’s advice. But for people looking to gain strength and power through lifting heavy weights with low reps per set, Woodert advises allowing the muscles time to recover before the next set. Working within 85-90 percent of the one rep max requires a longer rest period, but for everybody else, limiting the rest period is beneficial.

“Lets say the goal is to lose weight,” Woodert said. “Your goal has to be to keep your heart rate up. That being said, the more time you spend doing anything rest like, the lower the intensity the workout will be because your heart rate is going to go back down.”

When Woodert, who played football at USC, is training or working with competitive athletes, the televisions are on, but nobody is watching them. 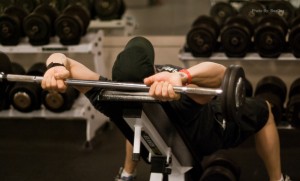 “If I lift weights, but then stop to watch the game, or chat with somebody while my body is sweating, my heart rate goes down, so the total amount of calories that I’ll burn will go down,” Woodert said.

Popular sports such as CrossFit utilize this mentality of little to no rest between sets, and the majority of these athletes have the bodies to prove its power.

So the next time you are in the gym, limit the conversations, watch your favorite shows on TiVo, and get to work.

2013-06-25
atlx
Share !
Previous: 4 Summer Additions to the Adventurer’s Bucket List
Next: Origins: The History of the Biathlon