The Origins of Modern Day Football

Although the current forms of American football, rugby, and soccer have defined themselves with little overlap, all three sports are said to have originated from an ancient Greek game, harpaston. The rules of this game were simple: the offense gets the ball across the goal line, and defense stops them. This game was meant not necessarily as a form of entertainment, but as a way to prepare soldiers for battle. 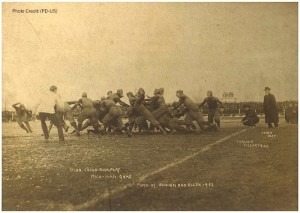 The sport didn’t dramatically change until the early 1800s in England, as two different sports began to emerge. While most schools played the sport in the form similar to modern day soccer, one school’s game looked much different. As the games began taking on very different traits, association football…soon shortened to the name soccer, officially became a separate sport while rugby evolved further into its form.

Rugby made its way across the pond by the mid-1800s. Football historians credit November 6, 1869 as the birthday of American football although the sport still strongly resembled rugby. As the excitement surrounding football grew, so did the necessity for a governing body. In 1873 Rutgers, Columbia, Yale and Princeton representatives established the Intercollegiate Football Association.

By 1882 the game was cut down to 11 players per side with a standard sized field set. The game was similar in many aspect to its current form, but major differences made this sport much more brutal and dangerous than the present day game.

By the early 1900s, football’s popularity rivaled baseball, America’s pastime. Sans helmets and rules set to protect the safety of the players, the game could be compared to a battle field. The forward pass was illegal, and players would have to run the ball past the defense, who would do anything in their power to stop forward progression. Death was not uncommon.

Without the protection of modern day pads and helmets, the injuries were limitless. After a Chicago Tribune report in 1903 that there were 18 football deaths that season, Americans began contesting the brutality of the game, many wanting to rid the sport all together. 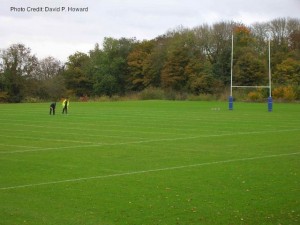 As the injuries and deaths piled up, the head man himself stepped in. President Theodore Roosevelt, an avid football fan as well started calling out to curb the violence of the sport. His plea did little to provide safety to the players, and some colleges were forced to drop the sport all together. President Roosevelt urged colleges to keep the sport, but pushed for radical changes to the rulebook.

The intercollegiate conference- the precursor to the NCAA, changed the rulebook in dramatic fashion for the 1906 season by allowing the forward pass among other changes. By 1907 deaths and injuries had sharply declined leading the rulebook to look much more similar to today’s game than its previous bloodied and dangerous counterpart.

With the new rules came new equipment. By legalizing the forward pass, intercollegiate conference set in motion the ball redesign creating a form more conducive for passing. Although some changes have been made throughout the century, modern football was born. Although vastly more popular in the United States, leagues continue to pop up throughout the world.