Eric Byrnes: From the MLB to the Ironman 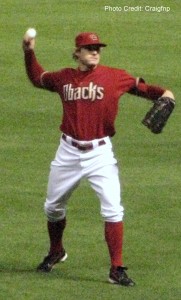 Eric Byrnes, former Major League Baseball outfielder, boasts a successful playing career. But the end of that career is just where this story begins. While many retired baseball players use their savings to play golf and relax, the Mountain View, Calif. native has used his retirement to continue training. Only this time, he is training as an Ironman.

When Byrnes retired from baseball at age 34, he was a little worn out. After playing for 10 years, baseball just wasn’t fun for him anymore. But, as any former athlete knows, it’s almost impossible to ignore that competitive itch. Byrnes was enjoying playing slow pitch softball with his buddies, surfing and improving his golf game, but that wasn’t enough.

He got into broadcasting, something he had always wanted to do, but it still felt like something was missing. “There was a competitive void to fill,” Byrnes told ATLX.

“When you go all these years competing at the highest level, then you take that out, that was definitely something athletically- and competition-wise that I was missing.”

When a friend mentioned the Pacific Grove Sprinter’s Triathlon, Byrnes decided to compete on a whim. He packed up his beach cruiser and headed to the starting line with little distance running experience and no swimming training to keep him afloat.

“I went down there, I did it. I absolutely got my ass kicked, and I did it on my beach cruiser and in my surfing wetsuit,” Byrnes said. “I fell in love with it.”

After a few more sprinter’s triathlons, Byrnes got serious, hired a coach, and 11 months later completed his first Ironman in Arizona.

Although Byrnes is a skilled professional athlete, and known for his quickness, his strengths didn’t translate to an Ironman.

“I might as well have been sitting on the couch for the past 15 years drinking beer… and my preparation for endurance sports would have been just about the same.” Byrnes said.

Baseball is, in large part, an anaerobic sport. It is Byrnes’s work ethic that has allowed him to meet the endurance required of an Ironman athlete. His competitive nature is a driving force, and he still craves the intensity of it. “I get butterflies when I step to that starting line just as I did playing Major League Baseball.” Byrnes said. “For me, it’s that intense in a good way. It’s definitely a rush.” 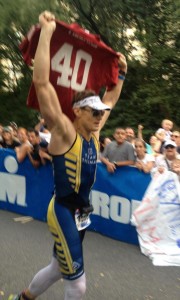 As his training continued, Byrnes realized he needed to shape up his diet. During his baseball years, he ate whatever he wanted. And we really mean what-ever-he-wanted. Byrnes said,“If I was hungry I would eat… Jack in the Box, no problem, I’d get four tacos and an ultimate cheeseburger. I’d go to Taco Bell and bare minimum five items: nacho supreme, bean burritos, two more tacos, it was disgusting now that I look back at it.”

Realizing he needed major adjustments, Byrnes had his blood tested and found he was gluten reactive. After eliminating gluten entirely, he saw major differences in his capabilities.

“I lived my life with this inflammation without even knowing it, and when I took it out it was just like, wow.” Byrnes said.

Now, his diet is predominantly vegetarian with no dairy. “I’ll eat meat sometimes, but it’s pretty plant based at this point.” Byrnes said. Not only does he see the difference in his training, his body has changed significantly as well.

Byrnes played baseball during the height of steroid abuse, and although he never used illegal performance enhancing drugs, he took supplements and downed protein to stay competitive with other players in the league. 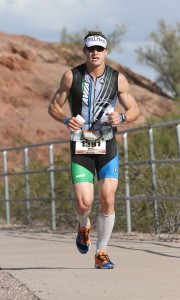 Triathlons have not only filled that competitive void Byrnes mentioned, but have also served as a sort of therapy for the 37-year-old.

“Eight months before I completed my first Ironman, my dad passed away,” Byrnes said. “I could have never gotten through that time period as well as I did without the training.”

Byrnes will be competing in his fourth Ironman to date in Lake Tahoe, Calif. in September. He plans to complete his first Ultra-marathon next year. “It’s a fascinating world, and I just really enjoy it.”