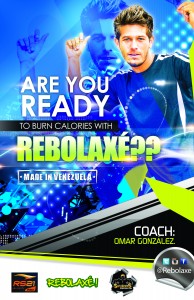 With all eyes on the World Cup this summer, the world got to see for better, and for worse, what Brazil has to offer. Brazil is synonymous with soccer, beautiful beaches, teeny-tiny bikinis and women who look stunning in those bikinis. So how do they do it? Well, that’s debatable, but it probably helps that Brazilians are also well known for their ability to dance, which certainly keeps you in great shape.

That’s the concept behind Omar Gonzalez’s new fitness and dance trend Rebolaxe, which he founded in 2010. Gonzalez, who is a native of Venezuela, Brazil’s neighbor to the north, combined the Portuguese terms Rebola, meaning movement, and Axe, which means positive energy. Move with Positive Energy. Really, what more could you want in a workout?

“We provide the benefits of weight loss, body shape molding, and stress relief through the fun and entertaining activity of dancing attracting positive energy,” said Gonzalez. “Once people are introduced to it for the first time, they become addicted to it.”

Gonzalez’s résumé, genetics and personal history all lend themselves to the creation of this popular dance workout. He didn’t just think of the idea for a new workout overnight, and he is certainly not new to fitness and sports. 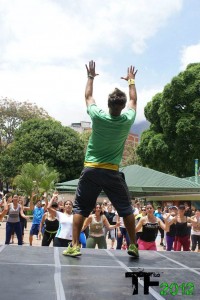 “Since childhood I have always been involved in sports. My parents are educators and work in the area of artistic gymnastics, especially my mother, (who was) one of the best gymnasts in the country in the 80s,” Gonzalez told ATLX.

Growing up, Gonzalez played soccer on both Venezuelan district and national teams, but found his true calling in dance. He began working in a Samba group as a musician and a dancer. Rebolaxe combines his passion for sport and for music, two important aspects of what he wants to be a fun, healthy experience.

Samba was just one of many Brazilian movements Gonzalez borrowed to create his fitness craze Rebolaxe, which also has roots in Batucada, Pagode, Funk, Lambada and Reggae. The movements work strictly with Brazilian music which is part of what he thinks aids in the positive atmosphere, and sets his fitness trend apart from other dance workouts such as Zumba.

No rhythm? No problem. The goal isn’t to become a world-class dancer, and it’s not even to get a world-class dancer’s body, although that might be a side effect. This is all about providing an experience of health and wellness, and some major calorie burning as well. 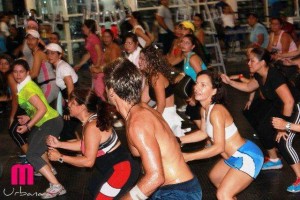 “The purpose of our classes is not just to teach people how to dance to Brazilian music, but to provide our customers that time to have fun, to try something new, and to relieve any stress through dancing.

“We are fully committed to the wellness of our customers by providing them a fun and intensive dancing workout that will keep them physically, mentally, spiritually, emotionally, and socially healthy,” said Gonzalez.

And yes, if you aren’t familiar with Brazilian dance, you may look and feel silly your first few classes, but Gonzalez assures those who are intrigued that the main focus is on health and not on aesthetics.

Looking or feeling silly while you get the choreography down may be well worth the 600 to 1,000 calories burned. The classes tend to be 45 minutes to an hour long and incorporate both anaerobic and aerobic movements. You’ll be getting a cardiovascular workout while targeting your abs, gluts and thighs. But more important to Gonzalez is the positive energy you’ll feel from the Brazilian music and all of the endorphins coursing through your system after a killer workout.

Rebolaxe has already swept Caracas, and is catching on in Miami. The rest of the United States is soon to follow.

For more information on this  fitness trend visit www.rebolaxe.com.