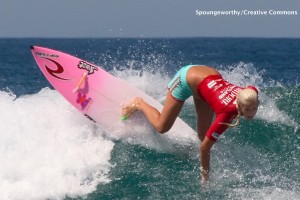 The most popular athletes make a name for themselves within their field of play, and then build their brand off that. One way that they build their personal image is by endorsing products, anywhere from clothes to electronics to automobiles. Anything that the general public uses its purchasing power for, an athlete will endorse it.

When it comes to female athletes, the arrangement can become a bit dicey. Most athletes have amazing bodies, and women with great physiques are especially in demand, because, well, in today’s society, sex sells. It would be foolish for a marketing agency not to take advantage of the beauty of a female athlete, but at the same time there are lines between what is tasteful and what can be considered disrespectful to women and their athletic accomplishments.

This controversy recently sparked up with a commercial from Roxy, a women’s fashion clothing brand that sells swimwear, among other clothing for active women. The commercial features world surfing champion Stephanie Gilmore. But instead of featuring her full body, there are no shots of her face…only close-ups of various other body parts.

The extended version of the Roxy commercial is where the issue lies. It appears that Roxy is promoting a lifestyle that would make a young woman want to purchase that product. But when does an ad go from tastefully selling a product while showcasing a female athlete’s beauty to flat-out objectifying her, turning her into a sex symbol? Steve Webster, President and CEO of CMPR, an events, publicity, and marketing firm, pays close attention to that question.

“I think that there are certain lines that you have to watch that you don’t cross,” Webster said. “In one sense, you might sell more of that product, but you’re also going to offend a lot of people.”

Judging by many of the ads that are on television and in magazines today, there are PR firms that ignore these lines, and they lose sight of the athlete, the product, and the brand, as companies try to push the envelope as much as possible. Webster feels that Roxy lost sight of what its brand is supposed to be and how a female athlete should be marketed. He believes that the beach shots were fine, and are what the commercial should’ve been, but he doesn’t care for the opening scenes of the extended version.

“Why was there any version in the bedroom?” Webster questioned. “It’s not for lingerie. It’s not for Victoria’s Secret. To me, it’s beyond comprehension. It’s fine on the beach. Roxy sports apparel has products for women to wear on the beach. But then when you go into the bedroom, you start thinking, ‘Is Roxy trying to be Victoria’s Secret? Are they trying to be in the campy lingerie business?’”

At CMPR, Webster is very mindful about how female athletes are promoted, and while he does believe that beauty can and certainly should be a part of a marketing campaign, it should not in any way take away from their athletic accomplishments.

“They are an athlete, period,” Webster said. “It’s irrelevant whether they are male or female. They got to where they are because of their talent in that particular sport. From a PR standpoint, no matter who we work with, I would never want to see that overshadowed.”

One major issue with the way female athletes are marketed is that there are a number of PR firms that do not take the stance that CMPR does. As much as it is about big business, there should still be a certain level of integrity.

One company that Webster said that he would turn down if they contacted him to use one of CMPR’s female clients is Carl’s Jr., who has made headlines with commercials that some would consider raunchy, in which scantily clad women eat the fast-food restaurant’s hamburgers. The ad campaign sells sex appeal to a much greater degree than it sells its burgers.

Webster does highlight a Serena Williams commercial that he argues worked extremely well. Williams is wearing high heels and shorts that show off her legs and well-built physique, but the manner that she’s dressed doesn’t sell sex, but rather the product, which are earphones made by Beats by Dre.

“It’s a sexy ad, but there isn’t a problem with it,” Webster said. “The way it was done, it made perfect sense for what they’re trying to sell. It’s fine to have Serena Williams sexy and shooting flames, and burning headphones to a Robin Thicke song, because it’s cool, it’s hip [and] it’s not offensive. But then you go into this Roxy ad: When they take her to the bedroom, you’re like, ‘What’s happening?'”

Webster believes that an athlete’s body can be showcased in a way that does not objectify the person, which ESPN The Magazine’s The Body Issue does. Both Gilmore and Williams have been featured nude in that issue, as well as a number of other high-profile male and female athletes. The photographs are artistically done, and even though the athletes are nude, certain body parts are either covered or obstructed from view so that the person is not shown fully nude. The images for the most part showcase the athletes in a sports-type environment as opposed to a bedroom scene.

“That does not lose sight of them as an athlete,” Webster said. “In fact, it sort of celebrates them. It makes sense when they do that. I don’t believe that they get any backlash for it, not the type of backlash that Roxy got because it all fits. The Serena ad all came together and fit, the ESPN The Body Issue all comes together and fits [and[ the Roxy ad on the beach fits. When they went to the bedroom, it stopped fitting.”

Women’s rights groups have fought hard for centuries for women to be treated fairly, and in the sports world women have made great strides over the last few decades. Certain ad campaigns show that as many major steps forward that women have taken, there are still strides to be made in the way that they’re portrayed.