Origins: How Tennis Has Evolved

Considering that tennis produces some of the highest-paid athletes in the world, it seems ironic that the storied roots stem from a game developed by monks, a group of people best known for their freedom from luxury and wealth.

But as all games tend to evolve, the game progressively moved away from the simplistic monks to a game of royalty. It is only suiting that tennis players, as some of the highest-paid athletes in the world, can afford to live like the royalty who enjoyed the same, although earlier version of the game. 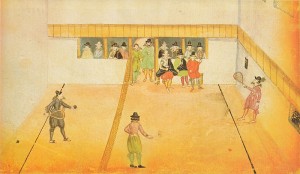 Although historians have evidence that the game was played in some form by the ancient Egyptians, more solid evidence of the game’s originations came in 1000 C.E. when history suggests French monks placed a net in their courtyard and volleyed a small wooden ball back and forth.

While it was certainly a rudimentary form of tennis, the name developed from that very version. During play, the monks would yell ‘tenez’ – french for ‘to take’ – when serving the ball. Tenez evolved to tennis, and while the current form of the sport was centuries away, the name was set.

It wasn’t long before the game made its way across the English Channel and by the 13th century, there is said to have been close to 2,000 courts in England alone. Both Kings Henry VII and Henry VIII were well known for their love of the game. History suggests that the infamous King Henry VIII was playing tennis when his second wife, Anne Boleyn, was executed by his order.

As the game grew in popularity, the rules and equipment changed about as quickly as Henry VIII changed wives, but by the 1700s its popularity became stagnant. It wasn’t until the late 1800s when the technology to create a rubber, bouncier ball made the game more 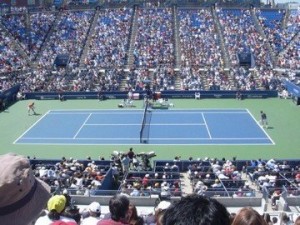 accessible for common people to play on grass. The game again exploded in popularity.

With this new technology, a new era of sports was born and in 1877, Wimbledon commenced, followed shortly by the US Open in 1881, the French Open in 1891 and the fourth and final event that would round out the Grand Slam, the Australian Open, in 1905.

Although tennis had become hugely popular, the first professional championship wasn’t held until 1927. Even then, however, professionals were still not allowed to play in any of the Grand Slam events.

Tennis players were essentially limited in revenue. The best a tennis player could 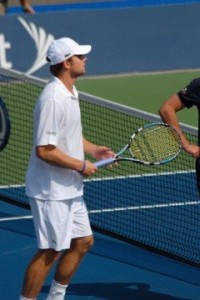 hope for was to gain enough popularity with their amateur status to garner enough interest to make money in the very few professional matches available. That all changed in 1968 when professionals were finally allowed to participate in the four grand slam tournaments. Sponsorships, TV rights and prize money soon followed with top players earning millions of dollars annually.

In 2013, four professional players graced the list of top-paid athletes, with Roger Federer leading the pack at No. 2 earning over $70 million last year alone.

While the game has evolved from its modest roots, the popularity of the sport remains and will live on for years to come.

Origins tennis 2013-09-17
atlx
Share !
Previous: Is It a Do or a Don’t? Running With Weights
Next: Doctor and Patient to Compete in Redman