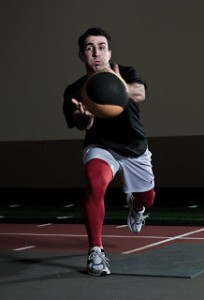 You can always tell a healthy athlete, just look at their legs. Unfortunately, 58% of baseball injuries are due to the upper body. Yet there is a link between your legs and upper body injuries, as the lower body must push into the ground to initiate any movement sequence, unless you are a water polo player.

his sequence begins by applying force into the ground (GRF) to start a series of joint motions that ultimately end in your body completing the desired action (see: Merry-go-rounds and ferris wheels on Sparta Point). This is perhaps the most difficult concept to grasp; how your lower body movement pattern affects your upper body, specifically injuries. But this isn’t a story about the tortoise and the hare, how you start is how you finish.

The most important principle to remember is that injuries generally occur due to a problem away from the injury site. For example, we have discussed low back pain being a result of weakness from above, also known as poor trunk or core stability (see: Why does your lower back hurt? via Sparta Point). But in more athletic movements which involve a flow of energy from the ground, we must first consider the downstream mechanics occurring at the foot, ankle, and hip.

A 2010 study out of the University of Arkansas found that the actions at the shoulder are strongly related to the actions of the pelvis and torso throughout the pitching motion, pointing to the hips as a major contributor to upper body injuries. We already know that the major determinant of hip pain is actually due to the ankles and feet (see: Why hip flexors tighten and why hips pop via Sparta Point). I hope you are starting to recognize a theme…

Specifically the authors discovered that in the rate of trunk rotation at release was shown to explain 67% of the variance in the angle of shoulder elevation at release. Basically the athletes with shoulder risk could not control their trunk during the pitching motion. This shoulder stress has also been linked to elbow injuries, like the UCL, but you probably figured that out since the energy from the legs flow to the shoulder and eventually to the elbow before the ball is released.

Such poor arm mechanics are only further accentuated by fatigue, so having great lower body mechanics that hold up over time is critical in preventing upper body injuries. 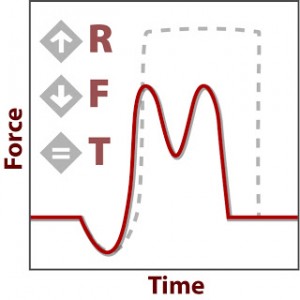 So how do we assess trunk rotation and the control needed to prevent upper body injuries? We have previously discussed, the movement signature common in rotational athletes (see: Why six second abs was onto something on Sparta Point). The majority of our high velocity pitchers (i.e. professionals) show this objective testing to the right.

Following the force time curve, the athlete can create huge amounts of RATE through sufficient leg strength, they then lose that energy through their trunk (FORCE), generally through excessive flexion, or rounding of the low back. Luckily, this energy is regained by efficient arm use (i.e. a big swing) and a great finish through the lower leg terminal extension (i.e. toe off). However, when this valley of FORCE is too low, athletes are unable to control their trunk in any and all directions.

At SPARTA, we prescribe this complex first due to the greatest intensity:

1.  Deadlift has the greatest amount of weight for our maximum strength movement (see: How to deadlift for stronger abs on Sparta Point).

2.  Lateral line hops has the largest GRF of reactive strength (double leg jump with an emphasis on distance).

Rotator cuff and shoulder evaluations can help, but are relatively meaningless unless the system works together as a whole. The same logic applies for isolated rotator cuff exercises.

Unless you’re throwing from the water, probably best to start from the ground up.

Oliver GD, Keeley DW. Pelvis and torso kinematics and their relationship to shoulder kinematics in high-school baseball pitchers. J Strength Cond Res. 2010 Dec;24(12):3241-6.Want more ATLX exclusives? Follow us on Twitter and like us on Facebook.

2013-04-05
atlx
Share !
Previous: Shoulder Pain Simplified: Are Scapula Exercises a Waste of Time?
Next: Why Does Your Lower Back Hurt?