Why Does Your Lower Back Hurt? 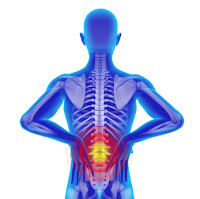 It’s the most common complaint of mankind…

Dull or shooting pain, left or right, in the middle or closer to your butt. Back pain affects us all from different activities, or more commonly from lack of exercise. But the good news is that this ailment has the same neuromuscular cause, loss of tension. The bad news is that your “core training” is not helping. 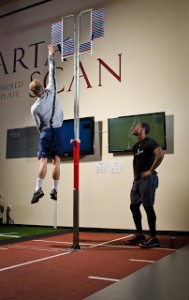 There is no “core” muscle, but it is an abstract concept usually involving the training of trunk and hip control. The core’s major role is to resist movement, and as such is strength is generally referred to as stability (see: Quick, where is your core? on Sparta Point). While core stability and these muscles are critical, the fault has been their emphasis as an isolated system, separate from the rest of the body.

To investigate the global role of the core, a review in August 2012 assembled all the previous research focused on the association between core stability and sports performance. The authors found that targeted core stability training provides little benefits to athletic performance. This insufficient stimulus from isolated core stability is from the inability to carry over to a complex performance task, but also to the movements that actually cause pain (running, picking something up, etc.).

We must assess movement patterns as a whole, particularly the sequence of ground reaction force (GRF), since that is where it all begins. 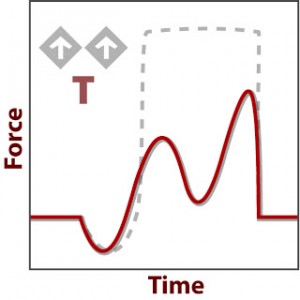 The  movement signatureTM associated with back pain, “long”, tends be a pattern high in TIME, but more importantly low in FORCE, which is the the deep valley shown in the graph to the right. Such sequencing and a deficit in FORCE is opposite to the “hinge” signature (see: Why you don’t need flexible hamstrings on Sparta Point), who rarely has back pain and moves much quicker.

The term “long”  refers both to the sequencing, as well as your body type. We see many volleyball players in this category, accustomed to moving by pushing their hips straight back and dropping their chest. These mechanics delay the stretch shortening cycle and prolong the movement, particularly avoiding faster twitch muscles like the gastrocnemius (see: How do you treat your fastest muscle? on Sparta Point). These “hip dominant” mechanics are present in most of their movements and puts excessive stress on the back because the use of the knees and ankles is limited. “Long” also refers to your body type, which includes taller athletes and ectomorphs, a body type with low body fat and that difficulty gaining weight/muscle.

Prescription: Pick something up!

If you need to prevent back pain, you need more FORCE, eliminating the dip shown above, by maintaining tension on your core throughout a complex movement. For this need, our lift of choice is the deadlift because the emphasis can be mostly on trunk. We further emphasize this stability by lightly touching the ground between each rep, “kissing” the ground (see: How to improve the deadlift for better glutes on Sparta Point).

Unfortunately, a common myth for lifting is subsequent back pain. After all, lifting heavier things provide a stimulus to the lower back area, improving your low back, or lumbar stability. An August 2012 article out of the National Institute of Health and Nutrition in Tokyo found that the muscularity in the lower region of the back is a determinant factor for the major heavy lifts; squat, high clean, and deadlift. These findings make sense because this lower back area, the lumbar spine, serves a crucial role in stabilizing the trunk/pelvis connection during movement.

So if you are “long” in stature or mechanics, hopefully you’re already into that first set of a heavier lift like the dead lift. Then again FORCE and a healthy back are probably overrated.

2013-04-05
atlx
Share !
Previous: Upper Body Injuries Start From the Ground
Next: Running a Marathon at the Top of the World