Matt Bowen Sr. has one memory from his childhood that sticks with him.

“I was one of the best football players in my district, as far as playing outside of uniforms,” Bowen said.  “But all of the guys that I played with, they played Pop Warner.  You know, organized sports, where you had to pay to play.  But my mom and stepfather, they were so caught up on bills, and with my stepfather being on drugs, they couldn’t really pay for me to play ball.  He used to lie and tell me that he was going pay for me to play.  Six o’clock comes and I’m sitting on the porch while everybody else is going to practice.  It was an eye opener.  I remember telling myself that if I ever had boys, I’m going to put my sons in athletics, and do everything that I can to keep them in there.” 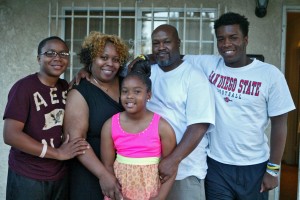 Bowen held true to his words.  He has three boys who have excelled at football and a daughter who is talented in tennis and track.

Bowen was able to play organized football in high school, but that was short lived because he had to work to help out his family. He ended up excelling as a running back at a community college, where he earned an Associates Degree.  He also played semi-pro football.

Growing up, home life for Bowen was very difficult.  His step father was a prison fugitive.

“His focus wasn’t really on raising me, it was really him just doing what he wanted to do,” Bowen said.  “He was very selfish.  My mom, she was the one that really raised me the most and she taught me how to be a man in life.  I know that was kind of hard for her to do, but she did the best that she could do at the time.”

While some men repeat the cycle of their own upbringing by abandoning their children like their fathers did to them, Bowen went the opposite direction.

“I looked at it like I really had a chance to change the dynasty with my family and with my name,” Bowen said.  “Being able to set a solid influence for my sons, to play ball, and pick up where I left off.  Not so much living through them, but letting them make a name for themselves.

“I wasn’t going to raise my kids the way that I was raised,” Bowen continued.  “I was really undisciplined, and that stemmed from my household.  My stepfather was on drugs, and his main concern was for himself.” 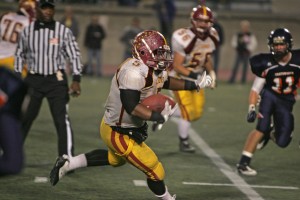 Bowen’s children have benefitted greatly from his decision to be the best father that he could be.  His son Matt Jr., 20, was a star running back in high school, and he led all Los Angeles high school running backs in rushing his junior and senior seasons, running for over 2,000 yards both years.  During his senior season he helped lead them to the city championship.  He is now playing football at the College of the Canyons, and has garnered interest from several Division I universities.

Bowen’s second oldest son, Myles, 16, is also playing football.  Heading into his second season as the starting varsity quarterback at his high school, he is one of the best in his area, and he also excels as a defensive back.

Bowen’s third son, Mason, 14, has been tearing it up in Pop Warner football.  Matt Jr. was too big to play Pop Warner, and Myles played basketball until he entered high school.  Mason is the only one of the three boys who has had the full experience of playing on the Pop Warner level, and there is one moment every year that  Bowen cannot wait for.

“I really look forward to sign up days, and I get kind of emotional because I remember back to sign up days when I was a kid and I was sitting on the porch,” Bowen said.  “I’m just happy to have them out there.”

Bowen takes great joy in training his boys.  He works out with them at the beach, the hills, and the stairs, and he also has them train in boxing, like he did when he was younger.

For the positions that Bowen’s sons play, speed is of great importance.

“We run on the sand, doing a lot of speed training,” Bowen said.  “We don’t just go to the beach, we go to the hills, we go to the stairs, but at the beach, we do a lot of strengthening of one leg.  A lot of one leg hops that turn into a 10-yard sprint.  In football, sometimes you have to hop on one leg because somebody else is grabbing your other leg, and you have to get into a full sprint.  You have to have that leg strong to stay on your feet.  Also on the sand, the ground is not stable.  If you can get stable on sand, then you will be much faster on the ground.” 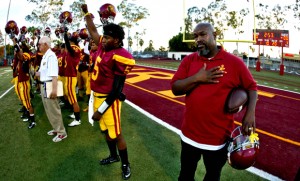 Training with his boys is, in a way, making up for Bowen’s childhood.

“I teach my girl to be tough,” Bowen said.  “I work her out, not as tough as I work my boys out, but I do work her out.  It’s a tough workout that she does, and she does sweat.  She wants it just just as bad as my boys do.  That’s my baby girl, that’s my princess.  I don’t want her to have big muscles, I just want her to have good form and be conditioned to swing the racket and run on the track.”

Bowen takes pride in being a great father and in having his name carried on by great children.

“The one thing that is guaranteed in life is that you’re going to live and you’re going to die, and somebody is going to have to carry your name and characteristics that you rubbed off on them,” Bowen said.  “So if you can rub off something good on your kids and give them something that they can carry on, then your dynasty will definitely be changed or enriched.”

Bowen’s children appreciate his efforts, and what he has provided them.

Bowen has been on the sideline of every one of his sons’ football games.  The players see him as one of the coaches, and his sons love having him there. 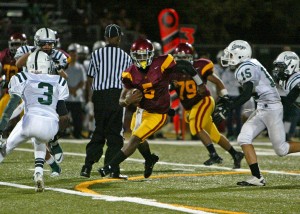 “It’s very important (that he is there),” Myles said.  “Honestly I think he’s in the game with me.  I play better when he’s there.  If he’s not there I just feel like there is something big in my life that’s missing.  It’s just beautiful to have him on the sideline every game, and for what ever challenges that I have he’s there.”

And Bowen’s wife Lisa appreciates that her children have such a strong and positive father figure in their lives.

“He’s a very good, caring person,” Lisa said.  “Everybody thinks that he is Mr. hardcore, and never cries, but he can be a cry baby.  He even got emotional when he heard about this interview.  He’s a very good father.  I’ve been very blessed as a mom, and that God paired us together.  We’ve been together for over 20 years now, and I couldn’t have asked for a better dad.  He wanted to change the dynasty with his upbringing, and he did.”

Matt Bowen Sr. wanted a different path for his children.  One that would be better than the one that he was forced to take on.  Because of that passion and love for his own, and because of his determination to provide a better childhood than the one he was provided, he is the leader of a strong family.