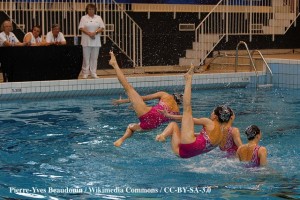 In terms of Olympic event origins, it’s relatively new. The sport came alive in the United States in the early 1900s when Australian swimmer Annette Kellerman came to America performing water acrobatics. The performances were immensely popular and synchronized swimming was born in the US.

Although Kellerman is often credited with the creation of the sport, water ballet was being performed in German by 1891. Around the same time clubs were starting to pop up all over the world.

Katherine Curtis added to the success of the sport by adding music to the performances. When her students performed at the Chicago Fair in 1933, the announcer, Olympic gold medalist Norman Ross coined the phrase: synchronized swimming.

As popularity rose, the Amateur Athletic Union took notice and added it to its list of events. By 1942, the first National Championships were born, even though only three clubs showed up to compete.

Synchronized swimming participants and advocates were soon promoting the possibility of being added to Olympic games; however, it certainly didn’t happen overnight. The International Olympic Committee will only add a sport after at least one year as a demonstration. In 1952 the sport had its first demonstration at the Hilsinki games, and although international interest was gaining rapidly the IOC waited over 30 years to add the sport to the official roster.

The 1984 Los Angeles Summer games was the first year the sport made its Olympic debut as a medaled sport. At the time, the events only consisted of solo and duet events. The event remained unchanged until the next time the Olympics made its way back to United States in 1996 when synchronized swimming was replaced with water ballet. In 2000 both the team event and the duet were on the program at the Sydney Olympic Games and has been ever since.

Currently, over 100 countries have competitions and programs for synchronized swimming, and since the sport is new, its evolution is still in progress. Who knows what the future will hold for this aesthetically pleasing, yet physically challenging sport.