The Origins of Modern Baseball

Baseball: the national sport of the United States of America with roughly half the age of the country, but nearly just as much drama. It’s a diversion refined over the years that has, at times, mirrored the social inequalities of the nation but grown past barriers and provided rushes of joy, sadness, inspiration and every emotion in between to fans.

A seemingly simple game, baseball has experienced anything other than a simple past. The sport has matured past humble beginnings, a multitude of rule changes, world wars, integration and competition from football and basketball as the king of sport in the U.S.

The roots of baseball undoubtedly immigrated to America from Europe with its founders in the late 18th and early 19th centuries, but it is difficult to pinpoint one direct ancestor. Cricket, stoolball and rounders are all English “bat-and-ball” games that exhibit very similar rules. While cricket is still one of the most common games in England, stoolball and rounders have both seen their peak of popularity pass. However, the closest predecessor for baseball lies in a sport named townball.

Townball varied from baseball in many ways but featured the four-base layout and a crude base-running system that included being “safe” if stopped at any of the bases before scoring a tally by reaching home plate. Game length at the time was usually either two innings of “all-out,” where each member of the team would have a turn at the plate or 11 innings of “one-out” play, needing only a single out to advance to the next frame.

As townball spread, Alexander Cartwright helped usher in baseball in the 1840s with his club, the New York Knickerbockers. 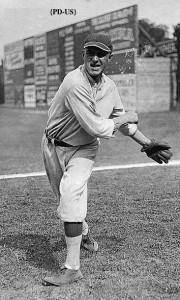 Cartwright added iconic rules for the sport, including three outs in an inning, three strikes for each batter and tagging runners instead of throwing the ball at them. He also set boundaries to the field of play, declaring balls hit outside the first- and third-base lines as “foul.” The new rules took baseball further away from townball and it became known as the “New York Game.” The first recorded game of baseball sporting its new rules was played June 19, 1846, in Hoboken, N.J.

With baseball popular across the Northeast and Midwest, the Civil War helped grow the game in the South. Following the end of the war, modern baseball began to take shape as the Cincinnati Red Stockings, the first professional club, opened business in 1869 and over the next 25 years the National League and American League were both formed. Although the two leagues would send representative teams to the World Series each year beginning in 1903, they would not merge as one organization until 2000.

The final major changes to the rules of the sport came about in the early 20th century as foul balls began counting as strikes and later the “dead ball era” came to an end.

Up until the 1920s, it was a common occurrence for teams to use one ball throughout an entire game due to high costs. By the end of the contest, a ball could be dark with dirt, spit or all kinds of foreign substances, making batting more difficult in the final innings. Following World War I, higher quality materials were used to make the balls and regulations were set in place to maintain a uniform size and composition. Much like adding the forward pass in football, the ball rules brought about much higher scoring contests with a greater number of home runs.

Although baseball hasn’t been without its controversies, it lives on as America’s favorite pastime.