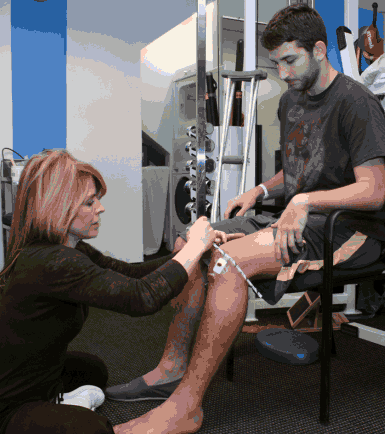 Francisco Perez could barely bend his arm while driving. After coming to Joubert Physical Therapy twice a week for two weeks, he claimed his pain went from an 8 to a 2 on the self-reported Numeric Rating Scale nurses typically ask patients to use.

“I was surprised how quickly it was,” said Perez, who practices mixed martial arts to stay in shape.

Before physical therapy came calling, Karen Joubert, the owner of Joubert Physical Therapy, was a figure skater. After training in upstate New York, she begged her parents to let her join the Ice Capades, where she ultimately toured for five years. “I said, ‘When I finish and I get off the road, I’ll go back to school,’” recalled Joubert.

Once she was done with the Ice Capades, a summer in Newport Beach convinced Joubert to apply exclusively to physical therapy programs on the West Coast, where the weather would be nice year-round.

At Mt. Saint Mary’s College, one of Joubert’s professors told her she’d be a great physical therapist, given her sports background. The light bulb was turned on. “I started working with a couple of athletes,” Joubert recounted, “and then you know how that goes…so it snowballed. And I’ve been with the NBA for about 15 years, and we just have tons of athletes.” She’s currently working with four Olympic gold medalists, as well.

Joubert’s athletic background, coupled with her history working with athletes, was one of the main reasons Perez chose to attend her clinic.

“I wanted to go to someone who had more experience with athletes,” said Perez. “They can understand sort of the mentality and the intensity that goes along with it [athletics].”

Joubert, who has worked with Venus and Serena Williams periodically for the past 15 years, picked up a critical nugget from the youngest sister. “I remember learning from Serena how much everything is mental,” said Joubert. “With pain, even rehab, it’s all about your attitude, because if you tell yourself you’re getting better, you have the ability to get better. That’s half the battle. So when my patients come in here, that’s probably the ticket to getting better.”

“The key to success in anything is having a positive attitude.”

The clinic staffs four physical therapists, including Joubert, as well as eight aides who are compiling experience before they apply to physical therapy school. Joubert Physical Therapy has been located at its current Beverly Hills address for 18 years; the company was started five years prior to that.

According to Joubert, her patients come from all walks of life and for various reasons: “People come in here for everything from a headache to an ankle sprain to post-operative surgeries.” 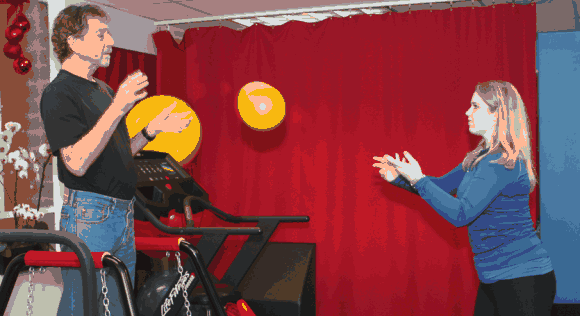 Although there are times when patients may whisper to Joubert, star-struck, asking if a particular professional athlete is sitting across the room, the athletes’ privacy is always respected. All patients, famous or not, are in the office for a specific purpose: to get better. “Pain doesn’t discriminate,” said Joubert. “They’re all the same.”

Joubert remarked that low-back pain is the most common ailment her patients come in with, because people are typically sitting all day. “That’s why exercising and moving and being active are so important,” said Joubert.

Because it’s the summer and athletes comprise a large percentage of her clientele, ACL surgery rehabs are second-most frequent. Interestingly enough, Joubert has also seen an increase in what she called “text-neck,” as people tend to repeatedly look down at their phones.

Some people come in for preventative rehab before any injury even occurs. “Young female soccer players’ prevalence for ACL sprains and tears is really high, so they’ll come in and we’ll do an analysis of how they move, run and jump,” said Joubert. “Now, there’s a whole dynamic strengthening component to what these kids do.”

Joubert regularly works with Dr. Neal ElAttrache of Kerlan Jobe Orthopaedic Clinic and various other doctors over there. If, for instance, a person is scheduled to have an ACL surgery at Kerlan Jobe, (s)he may first come in to Joubert’s clinic. “Some people come in before they have a surgery to get to know us, to see what’s expected, learn the basic exercises, have their ACL surgery and come back and rehab with us,” said Joubert.

Whatever the reason for a prospective patient’s visit, Joubert seems to make people feel comfortable and put them at ease. It appears as though she’s followed her own advice: “The key to success in anything is having a positive attitude.” Joubert’s contagious positive attitude has successfully rehabilitated many people in need throughout the years. It has also kept her office extremely busy and should continue to do so for the foreseeable future.